Ivanishvili comments on flood – criticized for being late

Ivanishvili comments on flood – criticized for being late 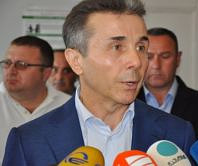 TBILISI, DFWatch–Former Prime Minister Bidzina Ivanishvili’s first comments about the flood disaster, which killed at least 19, destroyed forty homes and a zoo, were criticized for being too late.

It took six days until he commented publicly, but his organization Citizen wrote earlier that he is willing to help construct a new zoo.

The damages caused by the disaster will exceed 100 million laris, and thousands of volunteers are helping clean up and repair the affected areas.

Ivanishvili appeared at the National Exams Center on Thursday to attend a meeting dedicated to a new project by his organization Citizen aimed at encouraging students to go into business.

‘Georgia went through difficult days. We saw what consolidation we are capable of. In these days, we managed to unite and support [each other], which is remarkable,” he said.

Speaking about the zoo he continued saying that some misfortune is helpful, which by some was taken as belittling what has happened.

“The zoo had always been in a condition which I never liked. In 2006-2007 I made a project and spent some money. I promised the government to finance and help animals have proper conditions,” he said.

“If we cage animals, let’s treat them honorably. I think our zoo wasn’t an example in that regard.”

He expressed confidence that government will take charge of moving the zoo and he will help in that, but not buy the zoo.