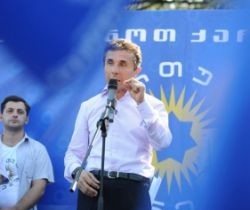 TBILISI, DFWatch – Bidzina Ivanishvili, leader of the largest opposition bloc in Georgia, promises that he will defend people’s vote solely by peaceful means and not call for a confrontation.

But he also says that there are several measures that need to be taken to conduct a fair election and asks the government to take into account six important issues.

Bidzina Ivanishvili said at a briefing Thursday that his Georgian Dream coalition will continue its election campaign at normal pace and not bring tension to the current situation. The coalition will also act within the frames of the law after the election.

“We do not plan confrontation, god forbid. No matter how things will go on, we will not create tension after the election. We will force the government to implement the people’s will within the frames of the law and the support of the international community.”

The coalition leader also says that today there are enough ground to consider elections scheduled for October 1 not fair and undemocratic. The reasons are actions by the government, implemented after Ivanishvili decided to go into politics. The actions include revoking the businessman’s Georgian citizenship, a whole number of legislative amendments, by which his political force is under pressure, while they are fined and their property is seized.

Despite all this, Ivanishvili says Georgian Dream is today ready to promise to recognize the election result. They only have one condition: that the election conditions will fundamentally change. Specifying what he meant, Ivanishvili listed six demands that has to be satisfied:

The first demand is to immediately stop the enforcement of fines, seizures and other sanctions initiated by the State Audit Service.

The second demand is technical and relates to how the income and expenses of Georgian Dream is calculated.

The third demand is to create conditions so all emigrants, a part of the population which make up about 25 percent of the voters, may participate in the election, even if this will mean to reschedule the election.

Georgian Dream also asks to abolish all kinds of restrictions and obstacles to distributing satellite dishes to the Georgian population, and that the government does something to inform the voters, including emigrants.

The coalition’s fifth request is to include its representative in the inter-agency commission and that the commission must work every day and be transparent and immediately review every case of political persecutions, blackmailing, firing and arrests.

The last request is to create a mechanism to monitor the practice of rules laid out in a declaration suggested by non-government organizations, which includes regulations for political parties about how to act in the election period and to avoid all kinds of violence.

Ivanishvili says if the government continues taking illegal steps before the election, no-one will recognize the election result.

He is sure the international community will see his political force’s simple truth and the government’s illegality.

The coalition leader said he has representatives in the Council of Europe, in Brussels, Strasbourg and Washington, where there are held meetings with officials.

“We will not end only by providing information and will maximally demand to observe their position.”

The government hasn’t made any comment regarding this proposal, but its representatives told DF Watch they will soon comment on this statement.