Ivanishvili: border reinforcement has to do with Olympics

Ivanishvili: border reinforcement has to do with Olympics 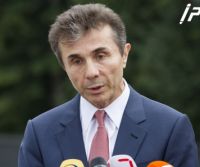 TBILISI, DFWatch–Prime Minister Bidzina Ivanishvili says the moving of the border line near the villages Ditsi and Dvani is connected to security around the upcoming Sochi Winter Olympics.

His comments were made on Wednesday while meeting economic analysts at his business center in Tbilisi and refer to recent actions by Russian soldiers to move the de facto border with South Ossetia, one of two Georgian breakaway regions supported by Russia.

Ivanishvili said Wednesday that Russia is focused on conducting the Olympics in a peaceful way and that he thinks the installation of wire blocks is not part of their policy.

“From my point of view and according to what I formally and informally know, installing wires is related to the Olympics,” he said. “We are doing everything we can, as openly as possible, to create the conditions for this and help them.”

Further explaining, Ivanishvili made reference to the recent detention in Batumi of a Russian Chechen, Yusuf Lakayev, who is on a list of persons and groups considered a threat to the 2014 Sochi Olympics.

Lakayev is suspected of having killed the Russian diplomat Dimitry Vishernev and wounded his wife on September 9 in Sukhumi, the capital of the other Georgian breakaway region, Abkhazia.

Lakayev was detained four days later in Batumi, after shooting one policeman and one passer-by, and Russia later requested his extradition.

“You know that in Batumi, we detained Lakaev, and this (the installation of razor wire, ed.) is also connected to that,” Ivanishvili said, according to news agency GHN.

The PM says law enforcement bodies have received special instructions and will do their best to aid Russia in making sure the Sochi Olympics can go ahead without incident.

“We will do everything in order that these Olympics can be conducted honorably, and we will participate in them. Later, many things will become obvious,” he said. “In my view, today, they don’t want these wires either. It is not part of their policy.”

“We do not justify it. This is very difficult and we do our best in order to support the affected population. I declare today that yes, we have our territories occupied. The installation of wires continues, which is very unfortunate,” he added.

The PM says that until the Olympics is finished, one cannot be sure about the attitudes towards Georgia’s northern neighbor.

“We are as patient as possible […] but are not raising our voice about the violations which are taking place.”