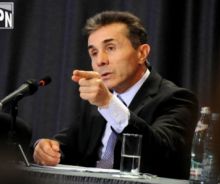 TBILISI, DFWatch–Prime Minister Bidzina Ivanishvili Wednesday sat down with a group of economic analysts to find out more about how they view the situation.

The PM had brought along quotes from newspapers with statements made by the assembled experts to different media outlets and asked them to explain their own quotes in various interviews.

He said he is always interested in their statements and tries to react, in case ‘remarks are objective’, and then he tries to change his actions.

“Very often I do not agree with your position, but this is also normal. Every expert must have as objective a position as possible, because your influence on society is great,” he told them.

Ivanishvili said that almost every expert says the same about the government fulfilling its promises given during the election campaign, but he doesn’t agree with them.

“We have almost a good police, if not very good,” he added.

“When you have complaints about the police, if you compare it to Germany or others, you will see the difference. I remind you to focus on reality,” he said. “A miracle happened in the police, the Prosecutor’s Office and the courts in these ten months.”

He said an ideal police force doesn’t exist even in Europe, where there also are critical questions. Ivanishvili also said that the police which harassed its own people and didn’t protect them, but instead formed vigilante groups, in Georgia called ‘sonder brigades’, is now culturally fulfilling legal responsibilities.

He also said that he thinks there are no problems in the Prosecutor’s Office either, despite questions being raised.

Even though he has always criticized President Mikheil Saakashvili’s governments, he has positive recollections of former Justice Minister Zurab Adeishvili, who has been away from Georgia since the defeat of the National Movement.

Ivanishivli says Adeiashvili was the most talented man in the previous government.

“Merabishvili always astonished me with his economic analysis, and when I asked how he knew so much, he said Adeishvili was his teacher. That’s why I was always interested in knowing him, but didn’t manage to,” PM said.