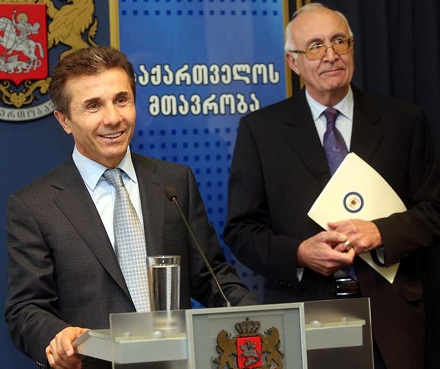 Ivanishvili said at a press conference Thursday that the country should mend relations with its largest neighbor.

He was standing side by side with Zurab Abashidze, former Georgian Ambassador to Russia, who will fill this newly created diplomatic post.

The Prime Minister said he thinks the country should have normal relations with countries with which it has a long common history and bring those relations to a higher level.

Bidzina Ivanishvili says the situation is very difficult; borders were closed before the war in August 2008; then there was war and the situation hasn’t changed until now.

“Many Georgians live in Russia, work there to save families, there are many mixed families and we have close culture. It gives hope for mending our relations,” he said.

While presenting the new candidate, he said Zurab Abashidze has much experience and has many friends in Russia, which might make it easier to fulfill very difficult duties.

“It will be ideal if we managed to bring citrus to Russia. We start with more simple things, which we think is more realistic to restore economic and cultural relations,” the prime minister said, adding that it is not possible to restore diplomatic relations soon, as there are too many problems that needs to be solved. There are Russian embassies in Georgia’s breakaway Abkhazia and South Ossetia, until they remain in those regions it is not possible to speak about restoration of diplomatic relations.

“They have certain red lines, which they do not plan to cross,” Zurab Abashidze, candidate for country’s representative for Russian relations said today. “They confirmed a number of times that they do not plan to refuse to recognize the independence of Abkhazia and so-called South Ossetia. We also have such lines, but yet we have other problems, where we can find common points of reference and solve them step by step.”

He said a few days ago that Russian officials have indicated they are awaiting specific steps by Georgia’s government. Creating a new post for relations with Russia will be a first step and Georgia awaits similar steps from Russia.

“Then it’s not excluded that we contact and agree on a format, time and place for dialogue.”

How possible is it that Georgia’s aspiration to NATO integration may comply with opening market relations with Russia, Ivanishvili was asked. He said preparations to restore market relations should start tomorrow.

“NATO integration cannot happen tomorrow and the day after tomorrow. This takes time,” he said, adding that it is not yet known when Zurab Abashidze will go to Moscow for negotiations.