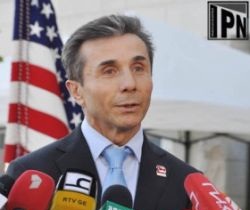 The announcement comes one day after Saakashvili’s National Movement party announced that the current prime minister, Vano Merabishvili, is their candidate for the same post.

Mr Ivanishvili at the same time invited the president to meet him for political debates.

But the businessman says that he is a coalition leader and accordingly will be a candidate to become prime minister, so he will only hold debates with the leader of the ruling party; President Saakashvili.

Bidzina Ivanishvili promised Saakashvili that if he will sit down with him for debates, he will not ask him any awkward questions.

«I won’t remind him about any of his mistakes, he just has to come and sit in debates. I will speak with him only about perspectives and the country’s development. I guarantee him I won’t ask any awkward question about mistakes,” he says.

“If Saakashvili won’t come I won’t sit in debates with [Speaker of Parliament Davit] Bakradze and [Prime Minister Vano] Merabishvili, no matter what number they will write on their foreheads, despite being familiar with Merabishvili, society won’t accept it, we are not of the same weight.”

The coalition leader explains that there is one additional way – not less than seven and no more than 12 representatives of the government to sit down for debates with him. More people will cause trouble and in case the National Movement will name a future candidate for prime minister after President Saakashvili steps down in 2013, then he is ready to sit with this candidate in debates.

His argument is that the post of prime minister today is more like “a pensioner’s post” and that it was in reality a demotion for Vano Merabishvili when he was “thrown out” of the interior ministry and appointed prime minister earlier this summer. After 2013, when the new constitution comes into force, the prime minister will be the country’s real first person.

«There are two clear powers in Georgia – the government and the Georgian Dream coalition. I am the leader of this coalition, accordingly [I am] candidate for prime minister or for the post of the country’s first person. One shouldn’t confuse the future prime minister’s post with today’s pensioner’s post. If they name a candidate for prime minister, which Saakashvili hasn’t dared do until today, and if they say that this will for sure be [current Prime Minister Vano] Merabisvhili, I will sit down with him in TV debates. As for Davit Bakradze, I cannot understand what his duty really is. He gives the same answer to all questions and it won’t be interesting for people to sit in debates with him.”