‘Islam Is Not Terrorism’ rally in Tbilisi attracts few participants

‘Islam Is Not Terrorism’ rally in Tbilisi attracts few participants 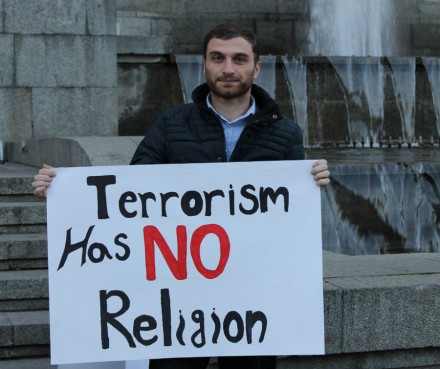 Tbilisi, DFWatch – A small group of activists protested against equating Islam with terrorism in the wake of Paris terrorist attacks.

Ten activists gathered in front of the old parliament building in Tbilisi on 18 November for ‘Islam Is Not Terrorism’ rally.

The activists held posters saying ‘Terrorism has no religion’, ‘Pray for Syria’, ‘Pray for Africa’, and ‘ISIS is not Islam’, among others.

The rally follows a larger gathering on 14 November, when up to 200 people commemorated the victims of the recent terrorist attacks in Paris and expressed their solidarity with France.

‘We gathered here to remind everyone that religion isn’t connected to terrorism. Georgia is a multicultural state where people of different religions live. We won’t achieve anything by stigmatising religions. We condemn terrorism, but not religion, which has, as such, little to do with terrorism’, Grigol Gegelia, one of the event’s organisers, told DF Watch.

‘Our aim is to show to the world that Islam doesn’t equal terrorism. Religion doesn’t preach violence, but all of us should fight terrorism and violence in its all forms. It is important to separate a man who commits terrorist acts from their religion’, Irakli Tedoradze from the International Council of Economics and Law said.