ISFED: No violations so far in Georgia’s election campaign

ISFED: No violations so far in Georgia’s election campaign 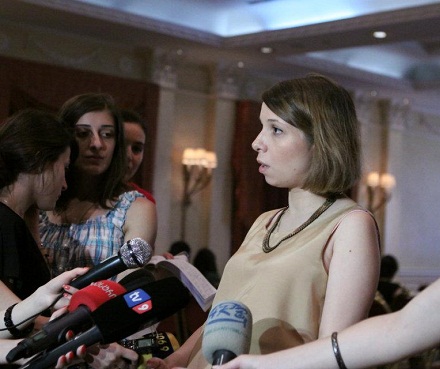 ISFED director Nino Lomjaria said a programme for loans to farmers may resemble voter bribery, as some of the money comes from a fund linked to Prime Minister Ivanishvili. (DFWatch photo.)

TBILISI, DFWatch–There has so far not been been observed any violations in the election campaign for the presidential election on October 27.

International Society for Fair Elections and Democracy (ISFED), a non-governmental organization which specializes in election issues, on Monday presented its first report about the election period.

In the past years, President Saakashvili’s government was often accused of using administrative resources for party political interests. It was repeatedly described in reports by local and international organizations that this happened, and for years the opposition demanded to solve the problem.

In the report, ISFED writes that they have not observed any instances of bribing voters in this latest election campaign, but the organization draws attention to one issue which may resemble voter bribery and may become a problem in the future.

The organization’s director Nino Lomjaria explains that the issue concerns a project of advantageous agriculture credits. The program involves giving agriculture loans with low interest rate. It is being implemented by the fund for village and agriculture development and receives support from Fund Kartu, which is linked to the current Prime Minister Bidzina Ivanishvili.

Georgian legislation prohibits material support to voters by legal or individual persons related to an ‘election subject’, another word for a person or group running in an election.

ISFED’s report also says that compared to the 2012 parliamentary election period, parties are less active in the upcoming presidential election.

In its recommendations, the organization suggests immediately publishing list of voters who have been removed from registration.

Nino Lomjaria says that according to data from the Central Election Commission there are registered 3 537 249 voters for the presidential election, but just like in 2012, the list of removed voters remains a problem this year as well. Voters who have changed address and moved have been removed from the list and not registered at their new address. This time the number of such voters is about 97 000.

The report describes two incidents which the authors assume was an instance of pressure on citizens on political grounds, and in both cases people went public with what had happened. Both took place in the Shida Kartli region in the towns Gori and Kaspi. In the first case there was physical violence, while in the other case there was threat towards a member of the town council for political reasons.