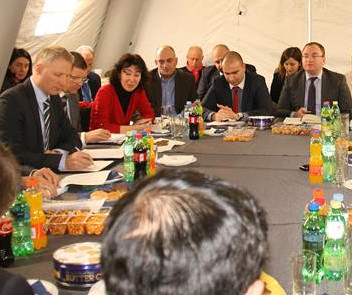 TBILISI, DFWatch–The field meeting on the perimeter of the South Ossetia region went ahead as planned on Wednesday, and some of the topics discussed were irrigation water and detention of people for border violations.

The meeting was held in Ergneti, a village bordering with Georgia’s breakaway region South Ossetia.

The Incident Prevention and Response Mechanism (IPRM) meetings are facilitated by the EU Monitoring Mission (EUMM), which assessed the situation as stable.

“Participants discussed several security-related incidents which have occurred since the last IPRM in January, such as detentions, explosions, allegations of shots fired and grass fires in the vicinity of the ABL,” EUMM wrote in a statement.

The Georgian State Security Service raised the problem with Georgian citizens being detained. The parties agree to continue working on the renovation of the so-called Triponi irrigation canal, as the villages near the administrative border line (ABL) are still without access to irrigation water, a problem that dates back several years.

David Sanakoyev, who represents South Ossetia at IPRM meetings, said that there were observed eight illegal border crossings by Georgian citizens. All of them were returned after going through the appropriate procedures, which usually include paying a 2,000 Russian rubles fine.

“Citizens who are living on both sides of the state border and who have access to irrigation water should receive this water after we achieve certain arrangements,” Sanakoyev said after the meeting.

The next IPRM meeting will take place on March 15.