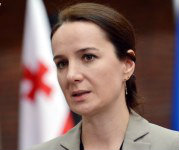 TBILISI, DFWatch–Georgian Education Minister Tamar Sanikidze said on Friday that a handful of Iraqi students had their residency permits revoked because they didn’t comply with the legal requirements.

The students, who are attending Akaki Tsereteli State University in Kutaisi, demonstrated a few days ago and asked the university for help.

Sanikidze said she didn’t have any information about the security risk the students were told they pose to the country.

“They also had to go through certain procedures of security rules, which are also described in legislation,” she said, explaining that the next step is to appeal the decision in court.

“If they have some additional documents to submit in order to receive residency permit, they will have this opportunity as well.”

They also have the option of taking a break from their studies until their problems are resolved, she added.