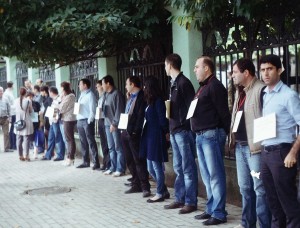 TBILISI, DFWatch – Georgian workers have almost no job security due to a weak labor code. This is a conscious policy choice by the government, justified by the need to attrack investors.

The main problem Georgian workers face is that an employer can fire an employee at any time without explanation.

That’s one of the findings in a new report about regulations in the labor market presented by Georgian Young Lawyers Association Monday at Tbilisi Metekhi Palace Hotel.

The survey covers labor relations, or how the legislation regulates the relations between the employers and employees.

There are also serious problems with labor contracts, and the issue of holidays is not properly regulated, so people often do not get the holiday they have a right to. Another problem is that people working overtime are not paid extra for it, even if he or she is ordered to do so by the employer.

Often people are afraid to get fired and they ‘close their eyes’ on things like working extra hours, or not having their holidays. In this case often the employer abuses his responsibilities and takes advantage of his position. Another problem is that often many people just don’t know even the rights that the labor code gives to them, GYLA told an audience consisting of representatives of local and international non-governmental organizations (NGOs), as well as Georgian Trade Unions and some media representatives.

The Georgian Labor Code of 1997 edition was changed in 2006. Since then the EU, the International Labor Organization (ILO), American trade unions and a number of other international organizations, as well as the Georgian non-governmental sector, have been repeatedly criticizing the code and given alternative recommendations to change the labor code, which today perfectly fits the employer, but suppresses the rights of the employees.

The government’s argument for this is that the country needs to attract more investors. Georgia offers them a good environment for investment, and that environment includes the labor code.

Apart from identifying problem areas, GYLA’s report also gives recommendations and makes comparison to other countries, like Germany and France.

The report also discusses problem of salary deduction, as there are many cases when the employer without any reason deducts the salary of the employee or even fines him or her.

After a short presentation of the analyses, Tiko Avaliani from GYLA spoke about the most common problems people are having who ask GYLA for help and judicial consultation. She said most common is firing without explanation. She says that very often it may be an expression of discrimination against members of some communities, or quite often members of trade unions, people with AIDS, or religious or other forms of discrimination.

The report also details cases of discrimination and recommends improving the procedure of job interviews. During the interview, employers often are discriminating against the applicant. For example pregnant people have some difficulties in this regard. The employer should not ask discriminatory questions to a person while interviewing and should give equal opportunities to applicants.

“It is expedient to determine the frames of interview questions, in order to prevent unequal treatment of employment seekers and limit the employer’s opportunity to reject a candidate based on asking a discriminatory question,” the report says.

Avaliani says another big problem that people applying to them have is that they have difficulties defending their rights if they only have a verbal contract.

“There also were many appeals about the fact that often people are obliged to work extra hours and don’t get compensations for it. Very often the working hours do not come in line with the conditions like it is in European countries,” she said.

One of the significant and important problems needing improvement, both in terms of legislation and in practical reality, is compensation for damage and safety in the work environment.

Avaliani names these cases among the problematic issues for people appealing to GYLA. At the presentation there were several remarks that improvements are crucial in this regard, and that it’s very unfortunate that the report doesn’t cover this sphere.

But Tamar Chugoshvili, GYLA chair, said that the organization has been working on this issue separately and appealed against the abolishment of the monthly subsistence allowance in the Constitutional Court, based on the Procedure for Compensating Health Injuries Sustained by Workers in the Course of their Job.

There are many problems in this area: people are often not compensated for professional traumas, mandatory medical treatment for the particular professions is not offered, compensations are not given to families of a person who died while carrying out his or her professional obligations etc.

Irakli Petriashvili, chairman of the Georgian Trade Union, attended Monday’s meeting. He remembered the changes made to the code in 2006. He said that together with the employer side and the health ministry they had discussed the ILO recommendations, and as a result, special changes have been prepared to once again make changes to article 37 in the code.

“The government and the Trade Unions achieved an agreement for an alternative form of the legislation,” he says. “The government was almost in favor of the changes, and this alternative was sent to the office of the Prime Minister, but finally it was refused to make these suggested changes which are approved by the employers and the government and prepared with a help of international organizations and their recommendations.”

Tamar Chugoshvili says her organization is going to prepare legislative changes in the labor sphere, which then will be presented to parliament.