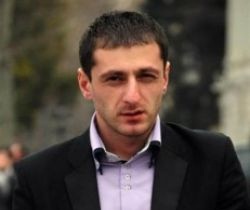 TBILISI, DFWatch – A journalist and a cameraman were beaten while investigating the illegal cutting of trees in eastern Georgia.

The journalist says they had received information about several facilities where there are kept illegally cut trees. The facilities do not have a proper license and usually they are located in private houses in the town of Akhmeta.

“We visited one of such facilities trying to talk with the owner, when several persons emerged from the house. The owner was probably among them. They beat my cameraman, broke our camera and microphone, but we saved [our] material,” Dabrundasvhili says.

The interior ministry today said an investigation has been launched into the incident, and that two messages reached Akhmeta’s regional police on August 22 about physical abuse of Bacho Bulisekeria and Vasil Dabrundashvili. Meanwhile locals Zaur Karmazanashvili and Osiko Chichiashvili also complained to the local police claiming that journalist and cameramen broke into their territory without permission, but despite their request they didn’t leave, which was followed by dispute and scuffle.

The team from GNS claims that they were beaten by Karmazanashvili and Chichiashvili.