Interview with the UK Ambassador to Georgia

Interview with the UK Ambassador to Georgia 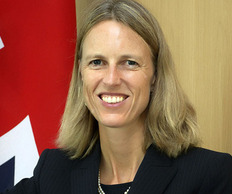 DF Watch sat down for talk with the recently appointed Ambassador of the United Kingdom to Georgia, Alexandra Hall Hall.

DF Watch: The political situation in Georgia is interesting now, especially since we have presidential elections coming. What are your expectations? How would you assess the pre-election environment?

Alexandra Hall Hall: Obviously I’m new to Georgia, so it is harder for me to make precise comparisons as to how this election will be, compared with previous years; but what most commentators are saying and colleagues who have been here longer than me and also in my trips to various parts of Georgia the consistent message I’m hearing is that the environment for this year’s elections are good and do represent meaningful progress on last year. I don’t want to prejudge the final days and the Election Day itself and we will be taking part in an observation mission ourselves with the American and Dutch embassies and I don’t want to prejudge the final outcome and what the OSCE observers might say, but judging from where we’ve got to so far I’m hopeful that the election will be sufficiently free and fair to mark another step forward for Georgia’s democracy.

DFW: The prime minister recently met with the editors of newspapers and radios. The meeting was quite long, during which he said that ‘at no cost will Georgia change its Euro-Atlantic direction.’ We also have to consider there is a big player in the region – Russia – and Russia wants former Soviet countries to join the Customs Union. You would have heard that the Armenian president unexpectedly changed his decision about joining the Union. Do you see this as potential threat to Georgia’s Euro-Atlantic aspirations?

1) It is a strongly held view and endorsed in the OSCE Helsinki principles, that every country should be free to choose its own relations and associations, and that is the sovereign right of every country. So, just as we recognize and accept that Armenia has recently decided where it wishes to form an association; so we respect and continue to believe Georgia should be free, independently of any pressure, to decide its own relations and associations free from any pressure.

2) Georgia has made it very clear, both in its government statements and also reflected in a cross party resolution from the Georgian parliament, that it wishes to pursue its Euro-Atlantic trajectory. We believe that the Association Agreement and DCFTA, the free trade agreement with the EU, will offer Georgia huge economic benefits over the years both in terms of access to the huge European market and in terms of offering consumers here in Georgia more choice and huge scope for Georgia’s economy to grow. The process is long and quite hard and it does require some reforms and regulations to harmonize our standards, but the long term benefits to Georgia’s economy and consumers are absolutely clear. It is also the case that technically and factually Georgia cannot at the same time have a DCFTA with the EU and join the Customs Union with Russia. This is not a politically imposed problem, it is simply technically impossible, because the standards and trading mechanisms that need to be set in place to realize the FTA with the EU are not the same as the mechanisms and procedures that would be required with the Customs Union.

3) The Eastern Partnership and the desire to initialize and sign the Association Agreement and DCFTA with Georgia is not conceived or intended at the expense of Russia; it is not some geo-political game designed to force Georgia to choose between developing relations with the EU or developing relations with Russia. The UK is part of the EU and has of course very extensive trading with our European partners and also is engaged in the process to develop our political and trading relationships with Russia and Georgia can develop its Free Trade Agreement with the EU and also continue to have relations with Russia and it is not a zero sum game.

DFW: When there are conflicts obviously the most successful strategies are the win-win strategies. Important parts of Georgia are occupied and the symbol of this occupation is not only tanks and soldiers, but also the wires and fences that are today installed in the villages which border with the so-called South Ossetia, dividing people, property, relatives, doesn’t allow ordinary people to do their work, to visit the cemetery. How do you see this situation and what specific steps must be taken in order to fulfill the agreement which was signed by the efforts of the EU after the 2008 war?

AHH: Well, of course we hope that the 2008 Sarkozy-Medvedev agreement would be respected, and we’re aware that that is not fully the case. I agree with you that what we should be looking for is a win-win scenario, and unfortunately the situation we’re in at the moment if you look at it from the perspective of people affected on the ground, is lose-lose. Obviously, it will be highly desirable if there could be some radical breakthrough and negotiated agreement reached at the high level between all parties concerned, but pending that I think a very productive way to proceed is to think about how to improve the lives of people affected immediately on the ground. I made it a priority to visit the administrative boundary lines both with South Ossetia and Abkhazia in my very first month here, because I wanted to see for myself and understand exactly how it does impact the people on the ground and irrespective of the wider geopolitical significance of the borderization.

What I really saw and felt first hand was that very damaging impact it had on families on the ground who had been communicating and working and trading and relating to each other for years and now having these barriers put between them, and I think that is extremely sad in the 21. century, to have such new fences going up irrespective of the broader political implications. So I think it is important for us to think about how we can improve and address the issues looking at how it impacts people on the ground and here I’m not just talking about people immediately on the lines but I also don’t want to forget the situation of IDPs, many of whom had been displaced for twenty years from their homes. We need to think about how to address the conflicts from that human perspective, while also hoping for progress at the Geneva talks, which remain the main and important forum. To that extent, we’ve been encouraged and like to support this government’s efforts to engage in a respectful dialogue and using courteous terms, talking about brothers and sisters in Abkhazia and South Ossetia, trying to improve the tone of that dialogue and relationship and try to find ways to cooperate.

DFW: There are debates about the issue about upcoming debates in the European Parliament about political prisoners here and about former Interior Minister’s, Vano Merabishvili’s status, what is your opinion about it?

AHH: It’s the nature of free speech that all sorts of opinions can be expressed, and it’s not possible to insist or predetermine how other people speak, but what Georgia can do is control what it does with its own processes, and my advice to Georgia is to let the facts and processes to speak for themselves and do the best you can to observe international human right standards which Georgia has pledged to do and let those processes speak for themselves. The investigations and the prosecutions are incredibly sensitive and so Georgia has to be careful and has to demonstrate that it is living up to the highest judicial standards in those investigations and if it can do so those processes will speak for themselves.

DFW: One of the most important subject of debates lately is also the issue of Georgia’s participation in the upcoming Sochi Winter Olympics, whether Georgia should boycott it. How may a boycott be seen from the outside?

AHH: I would like to believe that politics and sports do not mix, and in the spirit of the Olympic truce that we tried to observe when the UK hosted the Olympics last year, the ideal is for politics not to interfere in the way of international sporting events. How Georgia wants to handle its attendance in Sochi is really something for this government and the people of Georgia to decide and it wouldn’t be right for me to say what is the right for it to do.