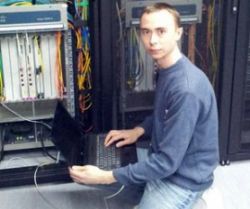 Samar Chokutayev, the suspect in the jihad video case. (Interpressnews.)

TBILISI, DFWatch–Interpol has issued a red alert in the search for Samar Chokutaev, the alleged perpetrator behind the so-called jihad videos against Georgian soldiers in Afghanistan.

The Prosecutor’s Office in Georgia sent documents to Interpol asking to launch a search for Chokutaev, a Kirgiz citizen, two weeks ago.

According to the Interior Ministry’s investigation, Chokutaev uploaded two threat videos from Abkhazia, a Georgian breakaway region. Chokutaev lives in Sukhumi, the administrative center of Abkhazia, and works for a local communications company. He is an IT specialist.

A court in Georgia reviewed the case and passed a ruling to place Chokutaev in pre-trial detention in absentia.