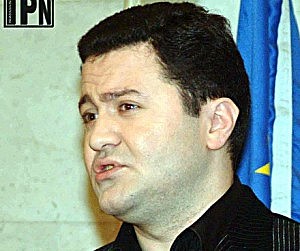 TBILISI, DFWatch–Georgia’s Chief Prosecutor states that former chief of security had Interpol’s red notice removed against him due to his refugee status, not ‘political persecution’, despite his family’s claims.

Interpol removed an arrest warrant that was issued for Data Akhalaia for the reason of ‘ongoing political persecution against him’, his sister-in-law, Ani Nadareishvili declared.

After the statement made it to major news outlets in the country, Georgia’s Chief Prosecutor Office issued a statement in which it explained that Interpol’s red notice on Data Akhalaia was revoked not because of the fact that he is wanted for crimes of political nature, but because he was granted refugee status by Greece.

The Chief Prosecutor’s statement reads that according to Interpol’s new regulations, a red notice can’t be issued on a person who enjoys refugee status in one of Interpol’s member countries.

Interpol hasn’t issued a statement regarding the reasons for the decision to remove red notice on Mr Akhalaia. In practice, there were cases of people recognised as refugees who remained on Interpol’s red notice list. There were also cases of red notice removals due to deeming the arrest warrants politically motivated — most notably, against former president Mikheil Saakashvili.

Data Akhalaia was chief of the Department of Constitutional Security (better known for its Georgian abbreviation, KUD) — an institution which was abolished in wake of 2012 elections, in which Georgian Dream won majority and replaced the United National Movement as the ruling party. The State Security Service (SUS) was established in 2015 and is currently fulfilling similar functions to the KUD.

He held high posts at the Interior Ministry and then chaired the KUD, which was one of the most important bodies at the ministry. The opposition at that time accused the KUD, along with the Special Operations Department (SOD), of attacks on the political opposition during mass protests in November 2007, April 2009, and May 2011.

Several criminal cases were opened against Mr Akhalaia after the change of government in 2012. He was later charged for torture, abuse of powers, and illegal deprivation of freedom and sentenced to time in prison in absentia. The government led by Georgian Dream turned to Interpol for help in bringing Mr Akhalaia and other former officials to justice.

Mr Akhalaia was arrested in 2014 when he was trying to enter Greece while travelling from Italy under a fake name. Shortly after his arrest, he was released on bail of 100,000 Euros. In 2015, despite Interpol’s red notice requesting his detention and possible extradition, Greek court rejected Georgia’s extradition request arguing that Mr Akhalaia was a subject of political persecution and that the charges against him were illegal. He was later granted refugee status by Greece.

Data’s younger brother Bacho Akhalaia served as head of the Penitentiary Department of the Ministry of Justice, then Minister of Defence, and briefly, in 2012, as Minister of Internal Affairs. He has been regarded by opponents of the United National Movement as the architect of the abuse system in Georgian prisons and was arrested in November 2012, soon after Georgian Dream took over power.