Improved human rights in Georgia, but minorities are discriminated

Improved human rights in Georgia, but minorities are discriminated 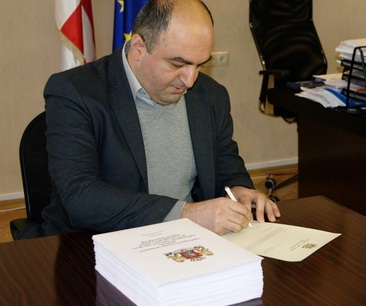 These are some of the human rights challenges in the Georgian ombudsman’s 2013 report, which was presented in parliament on Monday.

Although 2013 was a year of hope for Georgians in terms of human rights, there were many problems.

Also high up on the list of challenges are a number of cases of violations of the rights of ethnic and religious minorities.

There were violations of the rights of religious minorities in Tsintskharo, Samtatskharo, Tsikhisdziri and Chela, where Muslims weren’t allowed to pray or install a minaret at the mosque; conflict which was resolved in the end.

Early marriage of girls remains a problem in Georgia. It usually happens on the basis of agreement between parents – or by kidnapping.

One of the example given in the report is case which took place in Lagodekhi in eastern Georgia, where a father sold his minor daughter for 10 cows to a 45-year-old man.

According to the public defender, what happened in the case is common practice in Lagodekhi. Three cases of kidnapping girls for marriage took place in January-February, 2014, and more than 20 cases of early marriage.

According to data from the Education Ministry, 7 367 girls stopped going to school from 2011 to 2013 because of early marriage.

Violence in the family and the rights of women is also described in the report. There were 21 cases of women being killed in 2013; in eight of the cases they were killed by their husband and in one case by her own child.

From January 1 to December 31 there were 5 447 calls to the emergency call center about family conflicts, out of which 358 cases were identified as violence in the family.

Another issue described in his report is freedom of religion in public schools, as kids with different religious views aren’t protected from psychological, moral and physical violence.

“There is a discriminatory climate in schools which for minorities creates a sense of danger that the problem may become public.”

The ombudsman also writes that parents and children avoid to speak publicly about such discrimination.

A new problem in Georgia is human rights violations in connection with the construction of two gigantic hydro power projects, an Indian project called Khudoni in the Svaneti region, and a Norwegian project called Adjaristsqali, but also known as Shuakhevi, in the southeastern Adjara region.

But 2013 was a year that brought hope for thousands of Georgians that justice finally would be restored after almost a decade under authoritarian rule. The Ombudsman’s Office received more than eleven thousand complaints, more than double what it was in previous years, which, the ombudsman says, reflects increased expectations to the office, increased awareness of human rights violations and the existence of a free environment.

The ombudsman welcomes the mass amnesty which was passed in 2012 but enforced in early 2013, and saw the release of about half of the country’s prisoners. But an amnesty is not enough, he argued, it should be followed by the introduction of a legal mechanism to give the victims full redress, not only to their dignity and reputation, but also a fair compensation for damages inflicted upon them by the state.

But even with the amnesty, and the end to zero-tolerance policy, the report says, there still are problems in the prisons and mistreatment of prisoners; what used to be the main part of every ombudsman’s annual report.

Nanuashvili says there are currently positive changes in the prison system, but information about the death of several prisoners in 2013 ‘alarming’, and he is still receiving a number of complaints about possible violations of the human rights of prisoners.

“The government wasn’t able to provide security of these persons and their lives,” he said, “and so our recommendation to the Prosecutor’s Office is to immediately start investigation about each fact of mistreatment of prisoners.”

The report also mentions the criminal cases against former officials and says that in a number of cases there are questions raised about why there are investigations only into cases related to former officials.