I am ready to talk again

I am ready to talk again 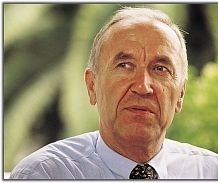 Dieter Boden has been Special Representative of the UN Secretary General on the Georgian-Abkhaz conflict, head of the OSCE Special Mission to Georgia and head of UNOMIG.

In a press conference held in Tbilisi on 5 April the Georgian Deputy Minister for Foreign Affairs, Nino Kalandadze, has attacked me for adopting unfriendly positions regarding her Government’s policy line, in particular for critisizing as „illusionist“ official concepts on conflict resolution. Moreover, Mrs Kalandadze accused me to have compared Georgia with Nazi Germany using quotations which are not mine.

Mrs Kalandadze’s Nazi argument is as infamous as it is unfounded. As for the conflict resolution issue, this obviously refers to Georgia’s „State Strategy on Occupied Territories“. When it was first made public in January 2010 I have welcomed it wishing it every possible success. At a later stage, when it had become clear that tangible results were not achieved, I proposed that the „Strategy“ be reviewed in certain respects.

Mrs Kalandadze concludes that any further cooperation with me will be „restricted“ and that delegations in which I participate will not be received officially. As mentioned before, her arguments for this are more than shaky. Why then this reaction? Why did Mrs Kalandadze go public without undertaking the least attempt to speak with me directly and try to sort out misperceptions and misinterpretations as they obviously have occurred here?

It is for more than 4 years that I have worked in Georgia on various UN and OSCE conflict settlement missions and, more recently, as a consultant of the Robert Bosch Foundation. Never has there been any serious doubt about the benefit which this work has brought to Georgia. Repeatedly, I have received acknowledgments from the highest levels of Parliament and Government . As recently as on 19 November 2011 when I was received by President Saakashvili in Tbilisi in the framework of a delegation initiated by the Bosch Foundation and the German Marshall Fund the President has praised my contribution to conflict resolution in Georgia as extremely significant.

Now, to my deep regret, the press conference of Mrs Kalandadze has struck a completely different note. But let there be no doubt: I remain a friend and well-wisher of Georgia which implies that I will not refrain from criticism whenever the cause will require it. On this I am ready to argue with anyone in the Georgian Government who is good-willed and not „one-eyed“.