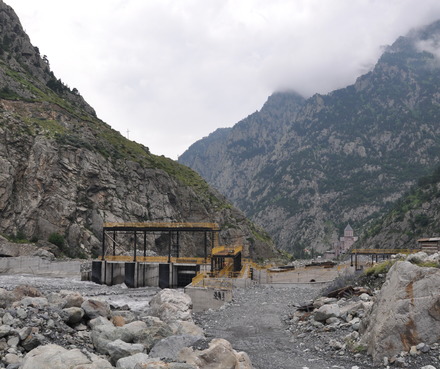 A hydro power tunnel that was flooded after a landslide on May 17 was searched for the first time Thursday. This is how the site looked in 2013. (DF Watch.)

TBILISI, DFWatch–For the first time after the catastrophic landslide in Dariali on May 17, rescue crew made their way into a tunnel in search of survivors, Georgian TV channel Rustavi 2 reported Thursday.

The tunnel, which is part of a hydro power plant under construction, was flooded by the river Tergi when part of a hillside tumbled down into the valley and clogged the water flow.

Rescue crew found a truck and a tractor in the tunnel, but none of the six missing were reported found.

Among the six missing, one is a Georgian, the rest are Turkish and Ukrainian citizens, according to the Interior Ministry. Some reports also say one of the missing is a Russian citizen, but this has not been confirmed by officials.

Gas flow through a pipeline that was damaged in the landslide was expected to be reopened in two days. The 120 mm diameter pipeline carries natural gas from Russia to Armenia, through Georgia.