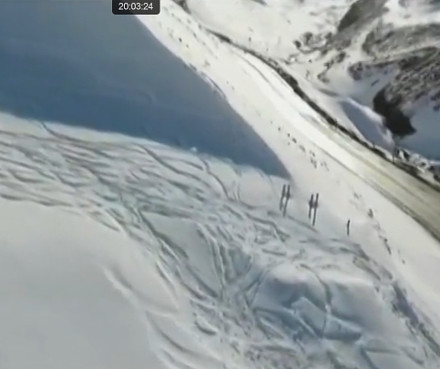 A screenshot from Imedi TV showing the tracks where the victim skied along with a group of tourists near Gudauri.

TBILISI, DFWatch–A Hungarian tourist died in an avalanche in Georgia on Friday while skiing near Gudauri, a mountain resort north of Tbilisi.

Authorities did not identity the victim beyond describing him as a man aged around 40.

The accident occurred when a group of tourists were skiing away from the main skiing routes.

The body was pulled out of the snow a few minutes after the avalanche hit, but his life could not be saved.

Skiing in the high mountains is particularly dangerous in March, because the thawing snow increases the risk of avalanches.

It is not known whether the victim had any connection to a group of Hungarian officials who are visiting Georgia. The delegation is headed by Hungarian Foreign Minister Peter Szijjarto, who met Prime Minister Giorgi Kvirikashvili on Friday.

Update: The news website Bors reported Saturday that the Hungarian Foreign Ministry informed them that the deceased was not a part of the official visit to Georgia.