Hundreds from a Georgian mining village demonstrated in Tbilisi

Hundreds from a Georgian mining village demonstrated in Tbilisi 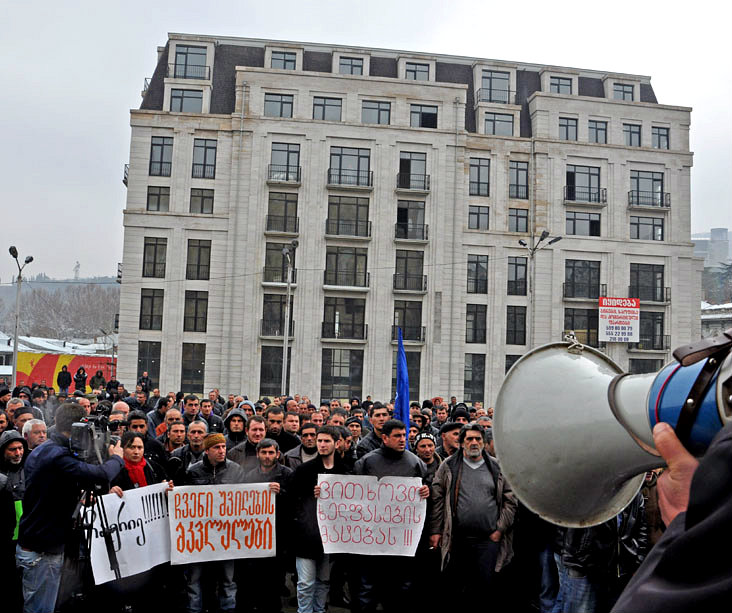 People from Kazreti and their supporters demand better work conditions for workers in the mines. (DF Watch.)

TBILISI, DFWatch–Several hundreds people from the village Kazreti in southern Georgia demonstrated in front of the government office in Tbilisi on Friday.

They demand that the government mediates between the workers and the company that owns the mines in their village.

For the last 23 days, the workers at RMG Gold and RMG Copper have been on a strike, and were joined by ordinary villagers, like teachers, market vendors, even children. 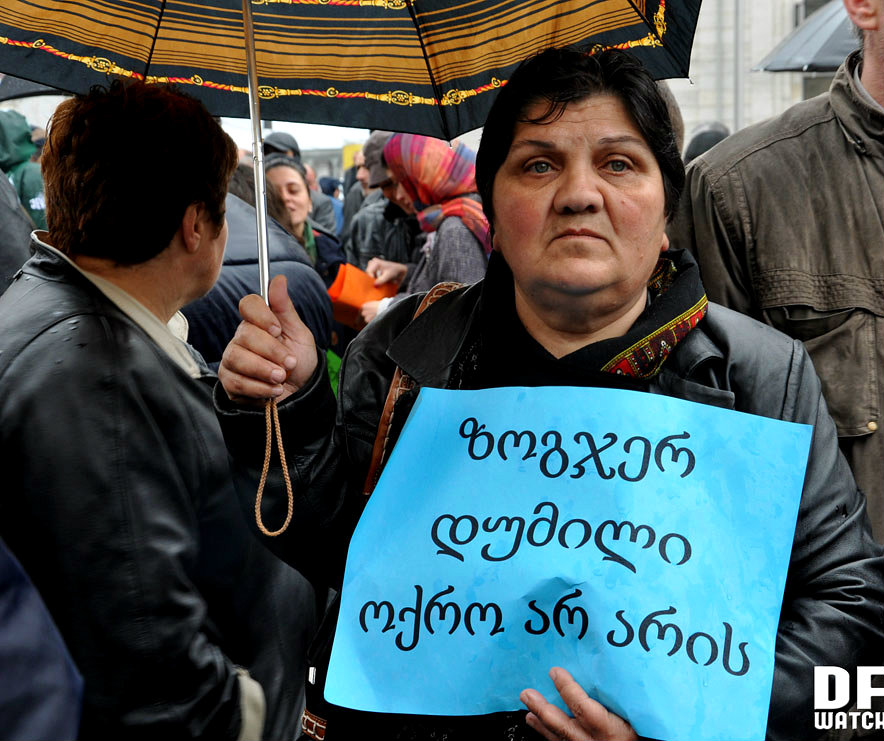 ‘Sometimes silence is not gold,’ this poster says. (DF Watch.)

Their demands are improved working conditions, increased salaries and to give about 180 workers their jobs back after they were fired about a month ago. They also want the management of RMG to be replaced.

Abesalom Shakarashvili, one of the participants of today’s rally, told us that some of the villagers collected one or two lari in order to get here by minibus, while others offered up their own cars to bring protesters in, and more than five hundred people came to Tbilisi.

Nunu Jakeli, a worker at RMG Gold, says people have been waiting for 23 days for the government to get involved and supporting them in their struggle. 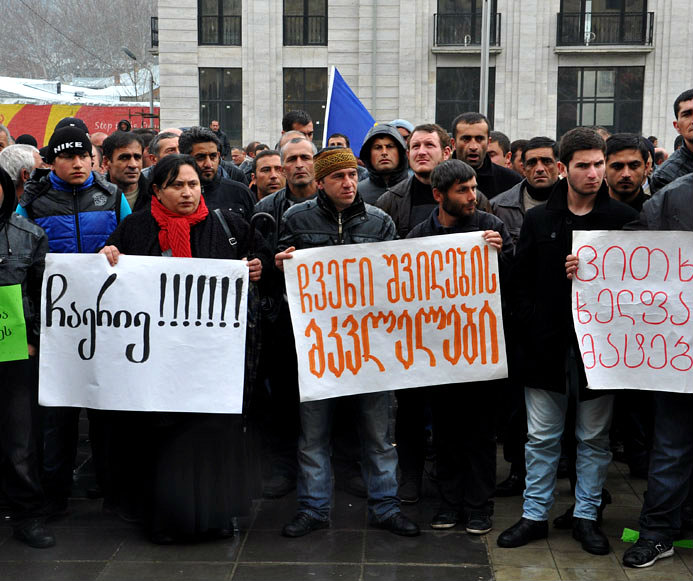 ‘Get involved!’ and ‘Muderers of our children’ these posters say. (DF Watch.)

“Why did we come here? Because no-one came to us; that’s why we came. There were so many reports in the media, everywhere, but no-one paid attention. We were forced to come here and ask for attention and for help,” she said. “I, as a citizen of this country, asks to protect my rights.”

Workers claim that they have difficult conditions at the plant and when many of them attempted to protest against it, more than 180 workers were fired.

However, RMG explained that the company is in a financial crisis and was forced to cut down on employees. 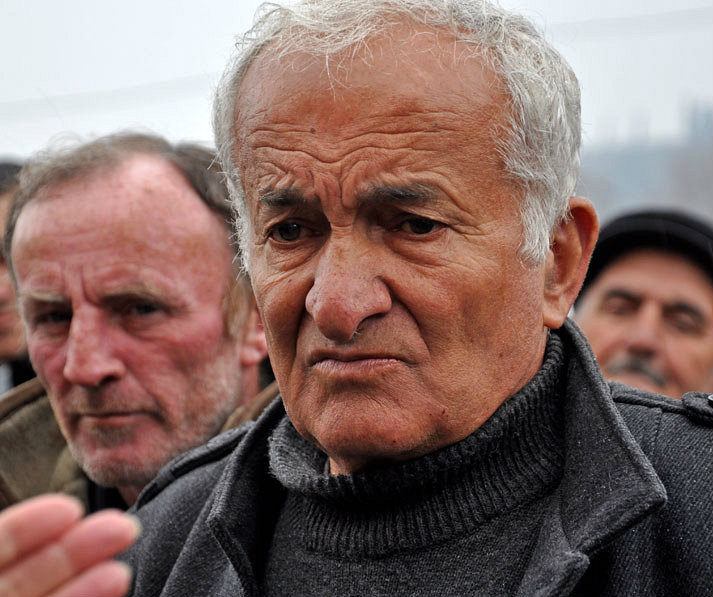 Abesalom Shakarashvili, one of the participants of Friday’s rally. (DF Watch.)

After the workers were fired, others decided to express their solidarity, and rallies started in the middle of February. Villagers, among whom are fired workers, current workers, teachers, drivers, school kids or elderly people, everyday come to the entrance of the company to protest.

Eleven people have been on hunger strike for nine days. Jakeli said today, the last of them was taken to the hospital. Some of them plan to continue the hunger strike when they leave hospital if their demands aren’t met.

Two hours after the rally started. representatives of the government office met with four of the workers. 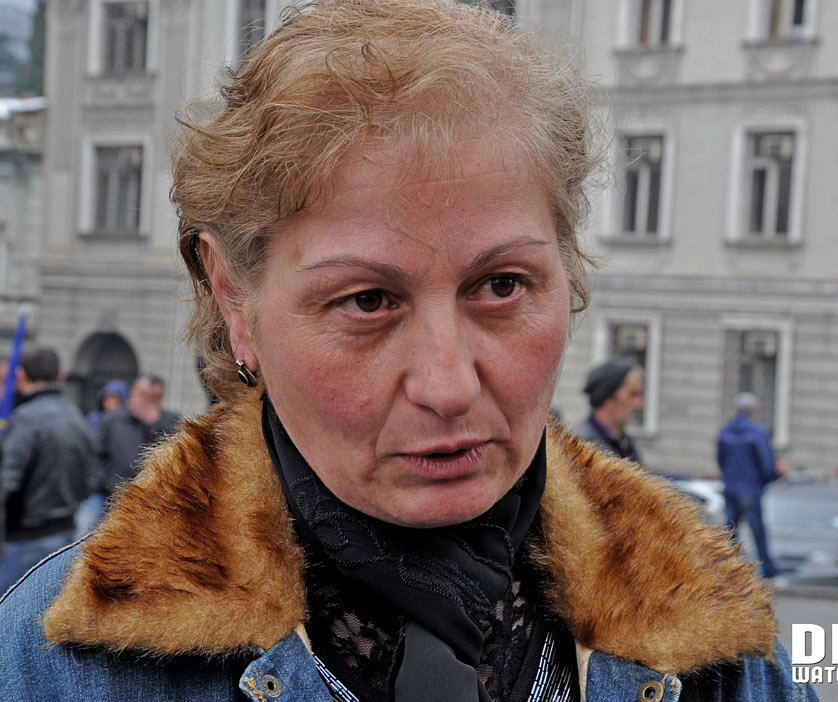 Joni Rtveladze, head of RMG Gold Trade Unions, who was among the four meeting with government representatives, told us that they were promised that a special commission will study the dispute.

He said the commission will consist of representatives from the company’s management, workers and the government. The Prime Minister will chair the commission.

Rtveladze told DF Watch that he, as head of the local trade union, is one of the members of the commission. Another member is Irakli Petriashvili, head of Georgia’s Trade Union. He doesn’t know how many members the commission will have, but said that it will go to Kazreti on Monday and study the situation.

Shakarashvili says the workers will continue their strike and if necessary go on hunger strike if their problems aren’t solved.

“There is a crisis. People don’t have money for bread. Schools and kindergartens are closed, there is nothing in the shops,” he said adding.

According to article 48 of Georgia’s Labor Code, the Health Ministry has to appoint a mediator in cases of dispute between employer and employees.

Health Minister Davit Sergeenko said on Wednesday that the ministry has already selected a candidate for mediator. He explained that the process of appointing a mediator was delayed because of consultations with experts of the International Labor Organization (ILO).

He said that the mediator will start work from Monday.

“We will get actively engaged in this process now,” he vowed.