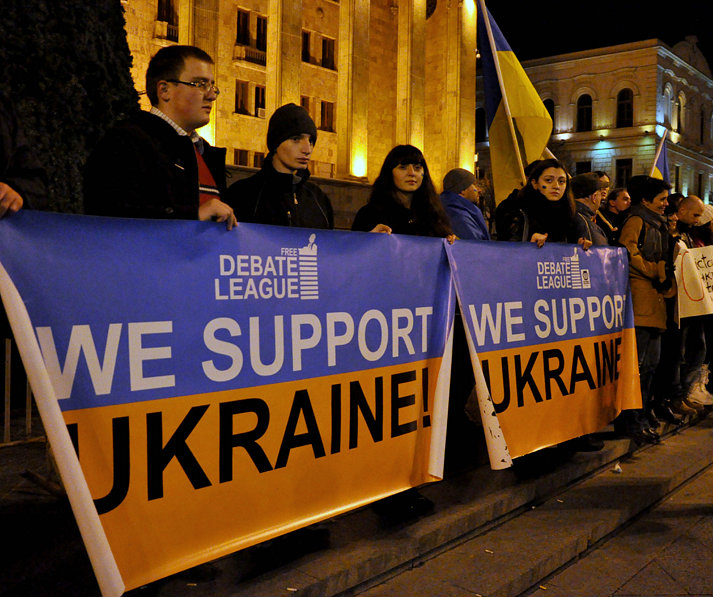 Several hundred people gathered in front of the old parliament building in Tbilisi Wednesday to show support for Ukraine after the violence in Kiev, (DF Watch.)

TBILISI, DFWatch–Wednesday evening, several hundred people demonstrated at the old parliament building in Tbilisi in support of Ukrainians who want integration with Europe.

Students, journalists, politicians, artists, singers and others filled the square in front of the building to express their protest against the actions of the Ukrainian government. 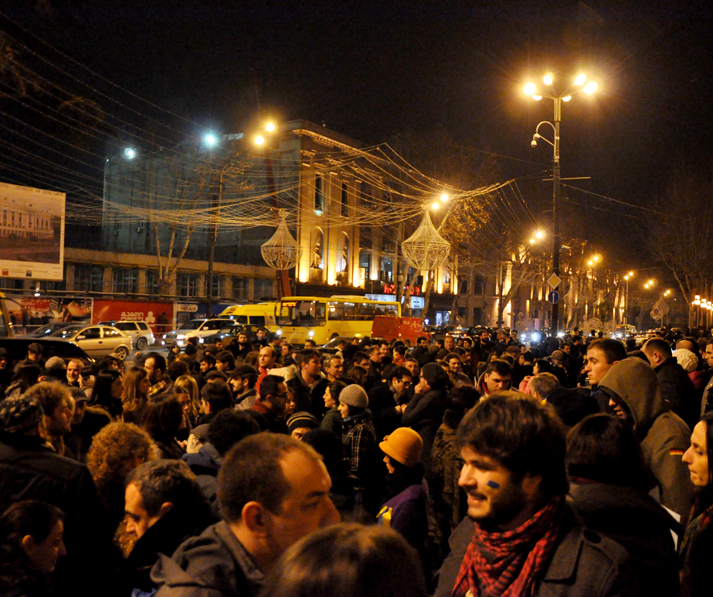 They carried posters with messages like “Stop dictatorship!”, “We Support Ukraine” and “Yanukovych, stop shooting”. There were some who offered participants to paint the Ukrainian flag on their faces. Others brought Ukrainian and EU flags and yellow and blue balloons.

“We must support Ukraine and the Ukrainian people in their European choice,” poet Defi Gogibedashvili said during the rally. He expressed hope that the events will transform into a peaceful dialogue.

Giorgi Baramidze from National Movement said what is happening in Ukraine would never have happened if there was no ‘Russian factor’.

Speaker of Parliament Davit Usupashvili, from the governing Georgian Dream coalition, earlier on Wednesday responded to the events in Ukraine by saying that the Ukrainian government and opposition must avoid further escalation of the situation, as it is important not only for Ukraine, but the whole region.

He expressed hope that politicians, other leaders, government and opposition will be able to achieve peace.

Prime Minister Irakli Gharibashvili also expressed concern about the events in Ukraine and the victims who died during the clashes there.

“We condemn all kinds of violence and we hope the Ukrainian government and society will be wise enough to not permit further violent development of events,” the PM’s statement reads.

“We believe that our Ukrainian friends are able to solve necessary political issues of the country’s democratic development through peaceful negotiations.”

Georgia’s Foreign Ministry called on the Ukrainian government and protesters to avoid using force, and hope that Ukraine, which is Georgia’s friend, will be able to defuse the situation via dialogue, taking into account the interests of people.

“We wish to see Ukraine with Georgia in the big European family sharing common European values,” the ministry writes.

The Ministry called on Georgian citizens and journalists in Kiev to be careful and avoid the part of the city where there are demonstrations and for journalists to take as much safety measures as possible.