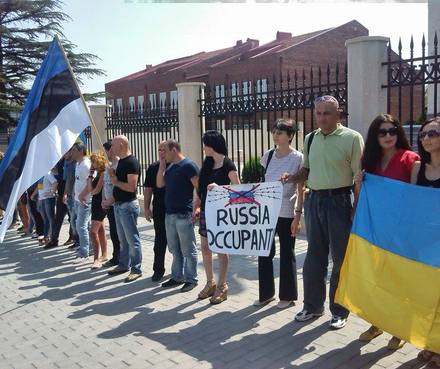 (Photo published by Free Zone, a youth group which supports the National Movement.)

TBILISI, DFWatch–The National Movement demonstrated outside the Ukrainian embassy in Tbilisi on Saturday, to mark the 25 year anniversary of Freedom Chain, an anti-Soviet protest, and to express solidarity with Ukraine.

Demonstrators called on the government to support its strategic partner Ukraine in its fight against Russia’s military aggression.

One of them, Member of Parliament Giorgi Kandelaki, said that in 1989 about two million people formed a human chain from Vilnius to Tallinn, demanding freedom for Lithuania, Latvia and Estonia, and today when Ukraine fights the same force for freedom and for Georgia’s freedom as well they want to demand that the government unambiguously condemns Russia’s military aggression and assists children affected by the events in Ukraine.

The National Movement proposes to offer the refugee children rehabilitation programs in Georgia.

As part of the demonstration, there was a human chain in front of the Ukrainian embassy, and activists held Ukrainian and Georgian flags, balloons and accessories in the Ukrainian national colors and posters with messages like ‘Russia occupant’ and ‘Fuck Putin’.

“Unfortunately we are aware of our government’s position. It limits itself to half-hearted statements as if they support Ukraine, but they refuse to confront the Putin regime and express political support for our Ukrainian friends. They do not understand that this is our pragmatic statehood national interest and this is very unfortunate and dangerous for our country,” Giga Bokeria from UNM said on Saturday.