How tourists see Georgia and what they expect

How tourists see Georgia and what they expect 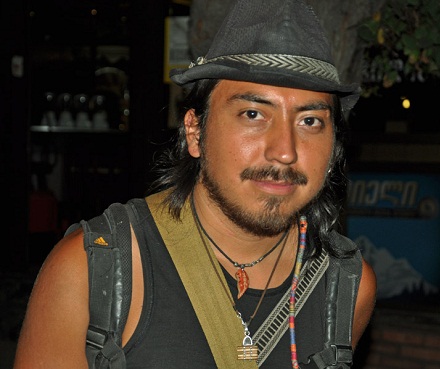 Luis from Ecuador has been traveling around the world for the last seven years, now stopping by to taste the Georgian dish khinkali. (Photo: Mari Nikuradze.)

TBILISI, DFWatch – Luis from Ecuador has been traveling for seven years around the world. This time he stops in Georgia for a while. He hadn’t heard much about this country, but stopped by here on his way to somewhere else. Then he decided to stay for several weeks.

Tbilisi has lately been crowded by tourists, especially in now in the hot summer weather, so DF Watch decided to speak to some of them and find out why they decided to come to Georgia and what they expect to see while they’re here.

Standing on Shardeni Street, which is one of the most beautiful but expensive places in the capital, Luis is looking for a cheap place to once again eat the famous Georgian dish khinkali, which is made of a meat ball boiled in dough. For food, he tells us that he is selling handmade jewelry in the streets. It’s not much, but enough to live.

Luis has already visited the mountain regions and the Black Sea coast. Now he plans to stay in the capital for a week and then move on to Baku.

The longest he has stayed in one place for these seven years was when he lived in Russia.

“But can you imagine, I wasn’t able to sell my stuff there. I needed to find a job, but to find a job you should know the language. So, I started studying Russian. After six months I got a job at pizzeria and worked there for another six months. Then I met Ukrainians, who told me that if I knew Russian it would be easy for me to work in Ukraine, so I left for Ukraine.”

He says he came to the region this way – by people telling him stuff about countries. But soon he is going to end his trip for a while and go back to his homeland. 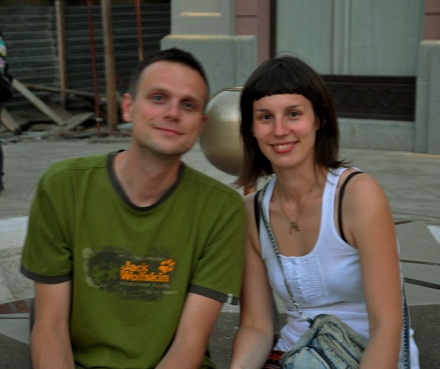 Agnieshka and her husband from Poland started out their honeymoon in Georgia. (Photo: Mari Nikuradze.)

“But not for long. I will study to play another musical instrument and other stuff and start traveling again. I will present my new knowledge to people and of course sell my handmade stuff.”

He travels alone. Sometimes it is a problem to carry tents. They become heavier and heavier, so he just leaves them in forests and then gather money to buy a new one if needed.

Agnieshka and her husband are on a honeymoon and started out in Georgia. It’s their first day in this country. They are from Poland and plan to spend two weeks in Georgia, then to visit Armenia for a week.

“Georgia is very popular in Poland. Our friends were here and they suggested we should visit, not only the capital but the regions in the mountains, maybe do some climbing,” she says adding that they are already amazed by the Georgian hospitality and say a man gave them ride from the airport to the hostel for free.

Groups of various foreigners are observed all over old Tbilisi. They are introduced to the history of old buildings and architecture, monuments.

We meet another couple from Poland, who is traveling with other people from Bulgaria and Romania. They seem a bit dissatisfied, as it is already a few days in Tbilisi and they couldn’t find a proper map of Tbilisi.

“You really should take care of such things. The tourist information at the airport was empty when we arrived. Maybe because it was 4 am, but this is an airport.”

Another problem they tell us about is that there is no transport from the airport to the city center at this time.

“We had to spend the whole night at the airport lying on the ground until the first bus came by. Maybe it will also be good to take care of this.” 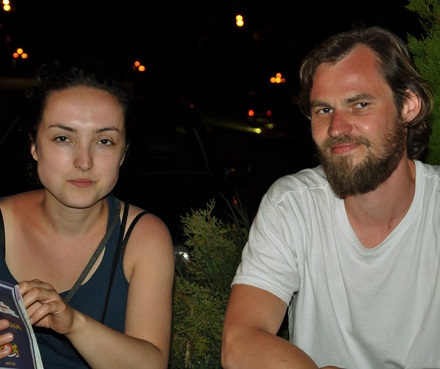 The tourist information at the airport was closed at 4 am and there was no transportation to the city center, perhaps things that could be improved, notes a couple from Poland. (Photo: Mari Nikuradze.)

They call themselves alternative tourist and are not planning to follow the ordinary tourist path, but to see something which everyone else hasn’t seen. They are not going to stay long in the capital but leave for the regions for weeks.

“We haven’t tried Georgian wine yet, but we won’t leave without it.”

The Georgian government annually informs about increased number of tourists, especially in 2012. The country alllows visa free entry for people from almost 80 countries in the world and in the beginning of this year, the country also cancelled visa requirements for all Russians, which increased the number of visitors from there too.

But the problem is that the country does not have a proper system to differentiate visitors from tourists. If a person travels on a business trip or a Georgian citizen leaves and comes back for some reason they all are counted as visitors, each trip, which makes the numbers presented by the country unreliable.

Since the Rose Revolution the government has focused on developing the tourism sector, rather than support agriculture, but a recent survey shows that this plan has failed to some degree.