How to empower women in business?

How to empower women in business? 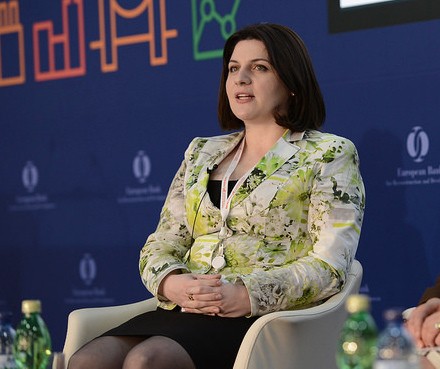 Deputy Energy Minister Mariam Valishvili said it is difficult for a woman in Georgia to concentrate fully on her career due to culture. (EBRD publicity photo.)

TBILISI, DFWatch–Only 3.9% of CEOs around the world are women. And only 14% of the richest 500 companies in the world have female executives. What can be done to include more women to predominantly male world of business?

May 14-15 the European Bank for Reconstruction and Development (EBRD) hosted their Annual Meeting and Business Forum in Tbilisi. One of the event panels was traditionally dedicated to women in business and challenges they face.

Woman is still the main caretaker

One of the panel members, Deputy Minister of Energy Mariam Valishvili, insisted that in Georgia it is hard for women to concentrate just on their careers, because culturally they are seen as the primary homemakers:  “Females are more involved in their families, have more obligations, which they have to carry out simultaneously. This makes them more organized and more efficient, and these are the skills that bring advantage to them.”

She thinks that education and relative experience are the main factors needed to achieve gender equality in the labor market. Valishvili stressed that the society should understand the woman’s attachment to her family, and she should be given a chance to show her commitment to work.

And in this case, state assistance is needed: “Does not matter how many hours you work, some part of your time must be allocated to your children, because the men will not take the responsibility. But in Georgia other family members are supporting working women and take care of the children when they are at work. But of course, better state policies needed, which would allow for a woman to dedicate more time for her professional career.”

Dania Denis-Smith, the founder and CEO of a U.K-based law firm Obelisk,  has created a lot of jobs for women lawyers by offering them as much flexibility, as possible. They specialize in English law, and about 10% of their 850 lawyers are based outside of the U.K. “There was a need for people, and we though – why shouldn’t we use the talent that there is?” The company’s strategy is to employ and empower women by offering them as much flexibility as they need, asking them how much time would they be able to allocate to their jobs. It varies from one hour to a full time commitment.

“It is their choice, if they want to put their family first. Then we ask them, how much time can they give us? What are their skills? What is the job that they can do? It is very hard to return to the job market full time, after having a child, thus women should have a clear goal in their lives, what they want to achieve,” said Denis-Smith.

According to Julia Dawson, who is a managing director of Thematic research at Credit Suisse, company boards with more women in them perform better, than just male ones. However, she continued, it is wrong to imagine that institutionalized quotas for the company boards would solve the gender equality problem. “The board is the wrong place to look for the solution. It is the company management, the existing gender pay gap that we need to address,” she said at the discussion.

Dawson continued that business world is constructed for men by men. “I am not trying to argue that women are better than men. It is differences that are beneficial,” she added, and gave the following example: studies show, that the best performing teams and groups are not those, which have the most intelligent men on board, but those, which have the most women: “Men are playing by the rules, that they created themselves. That is, they do not question their leader and loyalty is very important. Because, according to these unwritten rules, if their leader succeeds, he will take them with him. But women are not complying with this game – they are not afraid to ask difficult questions, and in the end it leads to better results.”