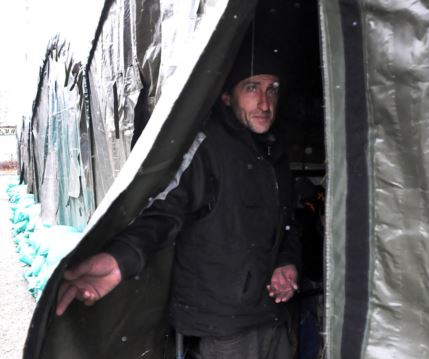 The tents are equipped with heating and electricity. (Photo: Mzia Saganelidze, Radio Liberty.)

The temporary tents are currently used by more than 200 people, including up to ten children.

The first four tents were put up December 11 on Moscow Avenue in Tbilisi to accomodate 80 people, but the number of homeless people increased and more tens were installed.

Some of the homeless people come to the tents, while others are brought there by the police.

The tents are heated with wood-burning stoves and have electricity and beds.

Near the tents there are wagons with bathroom and medical point, as well as diner. Doctors are there working 24-hour shifts.

According to the Health Ministry, people in the tents are supplied with medicines.