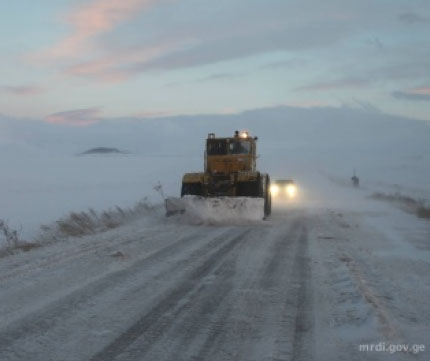 Tbilisi, DFWatch – Parts of the important roads in Georgia, including a highway connecting it with Armenia are still blocked due to heavy snow and danger of the deadly avalanches.

According to the most recent data of the Georgia’s Road Department, employees of the department  evacuated all people stuck near Ninotsminda, southern Georgia, close to the border checkpoint with Armenia, while the machinery still works in order to clean the road from snow.

Difficulties on highway Ninotsminda sector  appeared on Monday night. During the night 200 people were taken out, including minors and elderly, who had been struck there for whole evening, there was also a heavy wind. Those people were relocated in the houses of policemen living nearby. Later on Tuesday about 100 empty cars were withdrawn from Ninotsminda and brought to the safe place after evacuating people.

There were rows of cars stuck on check-points in Ninotsminda, at the border with Armenia and Stepantsminda, former Kazbegi, nearby border with Russia.

Roads are also being cleaned in on the Transcaucasus Highway that connects Georgia with Russia’s North Caucasus autonomies.  The situation here has been complicated due the danger of avalanche over last few days. Especially, on a sestor of road near winter resort of Gudauri, highest place on the TH.

Those stuck on the road section of Kobi-Gudauri were supplied of food and first aid products during the night by the Interior Ministry employees.

The Road Department claimed earlier the day, that road section of Pasanauri-Gudauri would open by the end of the day.

Meanwhile the people struck in the Gudauri were allowed to leave the resort.