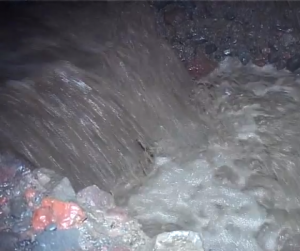 Tbilisi, DFWatch – A 25-year-old man has drowned in a river Sakirula, near resort town Borjomi, in southern Georgia on Tuesday after heavy rains caused floods across the area.

A commission for handling the flood has arranged in at Borjomi municipality. Murman Lomsadze was found dead by local youth, who dragged his corpse out of the water.

Lali Sikharulidze, local resident, said that torrent hit the village unexpectedly. It swept through her yard, flushing away everything on its path and killing almost all of her chickens. River floods occurred in other places too.