Heavy rain in Georgia, but so far no flooding

Heavy rain in Georgia, but so far no flooding 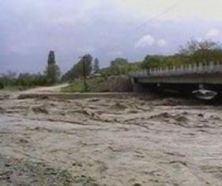 Georgia's eastern Kakheti region was severly hit by flooding in 2011, but so far this spring the waters have not run over the riverbeds. (Photo: Interpressnews.)

TBILISI, DFWatch – Rivers in Georgia’s Eastern region Kakheti swelled Tuesday after heavy rain and melting snow, but so far there has not been a repeat ot the disaster year 2011.

Deputy Governor of the region told Interpressnews that the rivers feeding Alazani, one of the country’s largest rivers, have swelled in Lagodekhi and Kvareli.

He says authorities have taken preventive measures considering last year’s flooding, one of them being that river beds have been cleaned to prevent damage if the water spills over.

“The level of water has increased, but there is nothing alarming yet. It would take magic for the water to spill over the riversides. We are constantly conducting preventive measures. We are cleaning and scouring riverbeds so that the water doesn’t go over the banks, and doesn’t cause loss and injury,” Giorgi Sibashvili said.

All the work is financed through the local and central budget.

The Cheratkhebi’s riverbed has also been prepared. This river is considered to be the greatest threat to the population in times of flooding.

Local news agency ‘Kakheti’s Khma’ (Voice of Kakheti) reports that in Gurjaani, the rivers have swelled.

Davit Petruzashvili from the local government says that their equipment is on stand-by in preparation for a repeat of last year’s devastation.

“Rivers have swelled and it’s possible that they will swell even more. We are prepared so that water won’t cause damage. Appropriate equipment is also prepared.”

The same person from Gurjaani local government Goga Petruzashvili says that the river created problems also in another village;Velisthiskhe.

“I came there, we observed the place. As soon as the weather gets better and the level of the river decreases, we will start working.”

The agency reports that also other rivers have swelled, but none of them have run over their beds.

“Snow is melting in mountains and this always happens this time of year. More water is released than in winter. There is no danger of rivers spilling over, because it is not raining intensively,” head of Lagodekhi’s Council Gia Gozalashvili says. (Source: Interpressnews.)