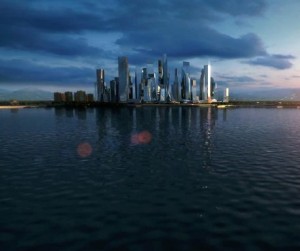 Saakashvili's new Utopian commercial center on the Black Sea is just an idea for the time being, as it has no official budget yet, but at least it has its own Facebook page. (Official photo from Facebook.)

TBILISI, DFWatch – A hypothetical city of half a million which still only exists as a Facebook page will be written into the constitution of Georgia.

The initiative comes from president Mikheil Saakashvili, who in a televised speech December 4, 2011 said the new city in ten years will have a population of half a million and be the main commercial center on the Black Sea.

Now, the idea-rich leader has suggested putting together a people’s commission to work out how to write the new city Lazika into the constitution, which might help it move beyond its current Facebook stage and become a reality.

As often before, the opposition is taken by surprise by Saakashvili’s unpredictable moves. Dimitry Lortkipanidze, who represents the coalition Unity for Justice in parliament, Tuesday told journalists that what “Misha” has come up with this time is absolutely unexpected and there is not clear basis for it.

“Lazika is to be given special status on the level of the constitution. This is unprecedented in the history of Georgia,” Lortkipanidze said.

Although the initiative comes from the president, it was unveiled by Pavle Kublashvili, head of the judiciary committee and a loyal ruling party parliamentarian who holds great sway among the “mishists” in the assembly and is the brother of the head of the country’s supreme court.

The president’s idea to build an entirely new city has been met with surprise and disbelief by political Tbilisi, despite the fact that they are accustomed to “Misha” coming up with ambitious plans. Some Tbilisi-based think tanks started making inquiries about Lazika, but soon found out that no government bodies had any information about it, no plans nor budget as to how to build the new city, although it does have its own Facebook page.