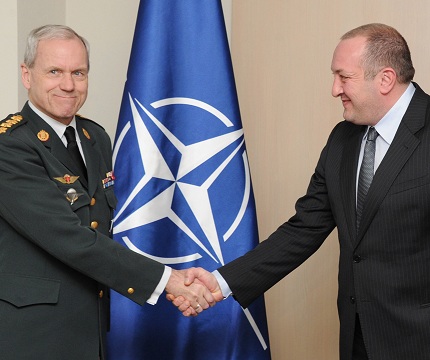 Defense Minister Irakli Alasania, Chief of Joint Staff, Major-General Vakhtang Kapanadze, and Ambassador of Georgia to NATO Levan Dolidze also attended the meeting, which was closed for the media.

Commenting after the meeting, Bartels said one of the issues they discussed was Georgia’s contribution to NATO operations.

“As Chairman of the NATO Military Committee, I can say that NATO-Georgia military cooperation is constructive, pragmatic and exemplary,” he said and thanked Georgia for its contribution and expressed condolences to families of soldiers who have died while participating in ISAF operations.

“This dynamism in terms of military engagements is a significant demonstration of Georgia’s commitment to NATO and we look forward to enhancing military cooperation after 2014,” he added.

President Margvelashvili noted that the committee’s visit is unprecedented and proves how much the alliance supports Georgia. He said they discussed future formats of further cooperation between NATO and Georgia.

“Georgia still stands ready to provide its contribution to global security,” he said.

Bartels also met Prime Minister Irakli Gharibashvili on Tuesday. The defense minister and the head of the Joint Staff also attended the meeting. They discussed current relations and cooperation issues, Georgia’s progress towards NATO integration, the democratization process and reforms.