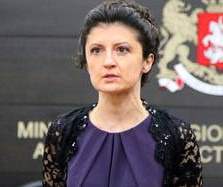 TBILISI, DFWatch–The discovery of 25 tons of hazardous waste in the roof of the House of Justice in Tbilisi may lead to new charges against ex-Justice Minister Zurab Adeishvili or his deputy.

According to current Justice Minister Thea Tsulukiani, the construction waste was ‘hidden’ by the previous government and is potentially life threatening. She has asked the Prosecutor General’s Office to look into the case.

The government is often criticized for its trials of former officials, because most of the charges turn out not to be supported by evidence. In addition, many of those who are charged are abroad, and many countries have rejected Georgia’s extradition requests, claiming that the charges more resemble political persecution than criminal prosecution. 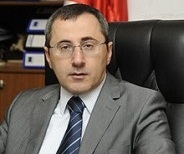 Such is also the situation when it comes to Zurab Adeishvili, the former justice minister whom Interpol recently took off the list of wanted persons. When Tsulukiani called for an investigation, she indicated that Adeishvili is responsible for the construction material that was discovered at the House of Justice.

However, responsibility could also be ascribed to Giorgi Vashadze, the former deputy justice minister, who was personally in charge of building houses of justice, not only the one in Tbilisi, but around the country. Vashadze is currently a member of parliament, and there has not yet been started an investigation against him. He is believed to be a close ally of ex-President Mikheil Saakashvili and often visits Ukraine, where Saakashvili, Adeishvili and other former officials are holding official posts. 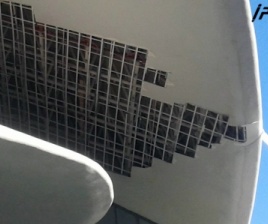 Pieces of the roof fell off in a storm in 2013. (Interpressnews.)

The House of Justice in Tbilisi lies next to the River Mtkvari and was built while Adeishvili was minister. It has become a popular building and been mentioned in international publications about architecture.

Tsulukiani said the incident she is speaking about happened two years ago.

Construction material was discovered in the roof of the House of Justice, which is two meters tall, in 2013, when high winds destroyed the frontal part of the roof, she continued.

“Misha [Mikheil] Saakashvili had to rapidly finish the construction and open this house in the fall of 2012. Waste remained in the roof and it was hazardous for life. This will be one more proof that life was not valuable back then.”

Members of the National Movement criticized the government for talking about three year old construction waste instead of opening new factories and creating jobs.

“It is a shame that the government is busy with this today instead of creating jobs and strengthening the economy,” Mikheil Machavariani says.

Saakashvili’s lawyer Otar Kakhidze told DF Watch that Tsulukiani’s statement is a violation of the presumption of innocence. He also said that if the waste was discovered in 2013 and the minister makes statement two years after that it indicates signs of political persecution.

A spokesperson for the Prosecutor General’s Office declined to comment for DF Watch, saying that they will only respond after they have studied the case.