Hard luck if you are a Roma in Tbilisi

Hard luck if you are a Roma in Tbilisi 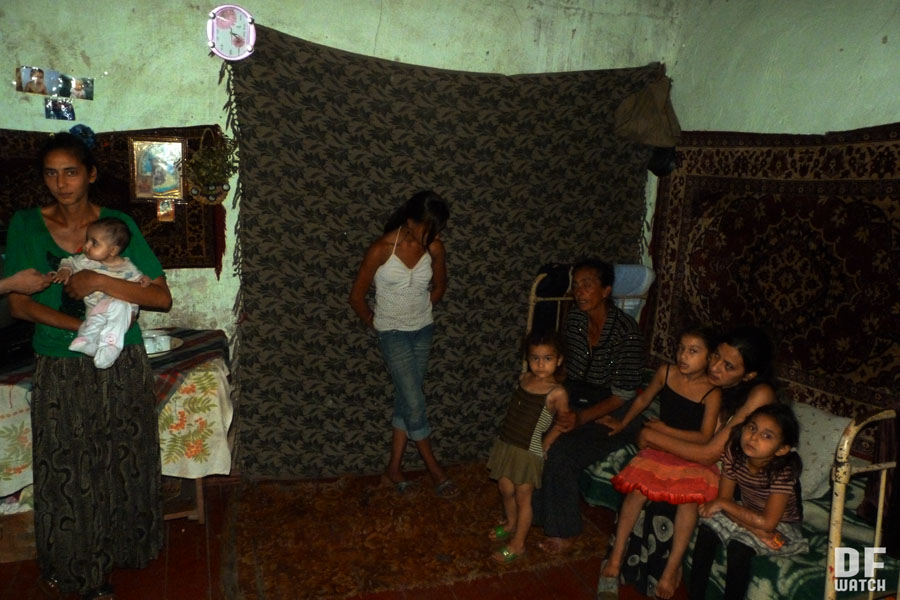 Many Roma families lack identity papers and are unable to enrol their children in the school system. (Photo: Mari Nikuradze.)

TBILISI, DFWatch – Walking the streets of Tbilisi, at several spots you will see groups of children dressed in worn-out, brightly colored clothes, with dirty hands and faces, asking you for money.

These beggars come from the city’s Roma community. The children you see will be supervised by 18-22 year old girls who instruct them, or punish them if they are rude to people.

You may meet children under four lying on the ground wrapped in warm sheets, but also while walking some may grab you by your legs and not let go until you give them money.

Passers-by sometimes get angry and even kick over their heads, until the odler girls start shouting.

You may also see Roma people on the bus or metro, singing or reciting a short poem, before starting to walk along the aisle to gather coins.

Older women are known to be selling various products at the market near the railway station, or at Lilo market on the outskirts of Tbilisi. Most people are aware that they may be selling stolen products and start trading with them, and it’s possible to buy goods at half or a third of the original price. 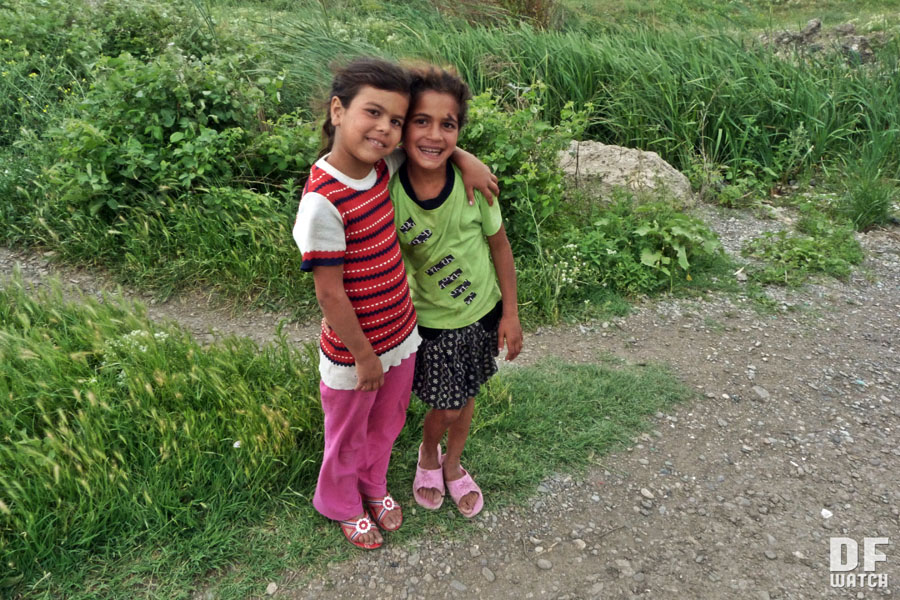 However, this is not all of the story. Stereotypes and rumors leads to Roma people being isolated from society. Some disgust them, some just fear them or are afraid of being robbed.

DF Watch decided to find out what their life is like.

There are several districts in the capital where Roma live. One of them is a place near Samgori metro station, five metro stops from the center. While walking on the streets in that area, we asked for the way to their houses. People responded ‘why do you seek them, did they steal something?’; ‘Roma people, no I don’t know, but I know where the gypsies live.’

There is a lane from the main street to a small alley, where people live in private houses. You would never suspect that behind a hill behind some residential highrises, between some garages, there is a tiny entrance to a whole street where Roma families are living.

Eight children live in a small, one floor house without windows. There is one room and three beds in it. The father invites us in, while five of his sons and daughters organize themselves to sit on one bed, looking excited that someone has come visiting.

None of them go to school. Their father says he just registered his children to get them birth documents and soon plans to take them to the nearest school. The school didn’t accept his children without documents. Even tough this is a large family, they don’t receive social assistance from government. They don’t know where to go to ask for such assistance.

But they do not complain. Their main income is the wife selling some products on the market.

It emerges that the main problem these families have is that they do not have passports or IDs, which would help them receive social assistance or vouchers from the government.

The reasons are different. Some just don’t know where to go, and what documentation they need to present; some don’t have enough money to get a passport and some just don’t have time to leave so many children home alone.

According to the Civil Registry website, an ID card costs upwards 33 lari. A passport costs 100 lari.

According to the National Statistics Department, there were 472 Roma in Georgia in 2002. The number seems to have increased since then, as in 2008 the European Center for Minority Issues reported there were 1 500 here who had an ID or passport. This means that the real number may be much higher.

According to the Public Defender’s 2010 annual report, Roma people only established themselves in Georgia in the 21. century.

The ombudsman writes that in regards to education, employment, protection of rights, political and civic activism and health care, Romas are one of the marginal groups in Georgia. 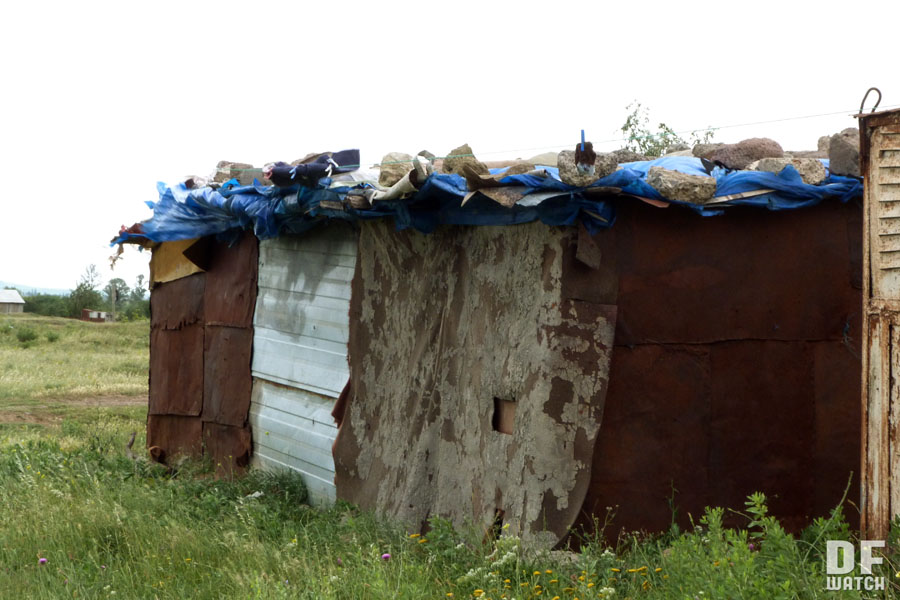 “Despite measures conducted by the government, it’s clear that the current policy cannot secure the Romas’ engagement in political and civic life, which can cause isolation from not only the majority of society, but also from the rest of the ethnic minorities.”

The reasons, according to the report, may be a general lack of information about society, as well as Romas lacking interest in getting involved in social life. Another reason may be the majority holding stereotypes about them as a group, preventing integration.

In the same are in Samgori, we visited another family. There are 11 children living in the Alimov residence. The house is of the same type, one room for everyone, with a small kitchen. There are not enough beds for everyone, so the adults are sleeping on the floor. When we enter, there is no place for us to sit.

In this family only the mother has a passport. Her sister with two children also lives with them, as she doesn’t have her own place. Ten years ago, they lived in Kobuleti, a coastal town in West Georgia, but the house burned down.

“We didn’t receive any compensation, our documents were burned. So we came to Tbilisi and since then we have been renting this house,” the mother says, adding that she pays ten lari per day, which includes utility fees.

She says she has a passport, but didn’t have time to go and find out how to get social assistance. Her children don’t have documents and don’t go to school.

Their income is also based on sales in the market place, which they say is barely enough to buy bread. Her husband is ill, but doesn’t have enough money for medical treatment.

“Ten years we have lived here, and no-one has ever visited us from the government or from organizations, social workers.”

In recent years, the government distributed 20 lari vouchers for electricity to almost a million families. But even though the mother with 11 children has a passport, she didn’t receive a voucher.

Georgia has a law called the Law to Develop the Demography Situation in Georgia, which provides for material assistance to families where there are more than three children under the age of 14. For every other child, assistance increases with one hundred lari.

We called the Ministry of Justice to get answers about Romas that lack ID documents. They redirected us to the civil registry, which in its turn redirected us to a non-governmental organization called the Group of Legal Development and Consultations, which cooperates with the registry. 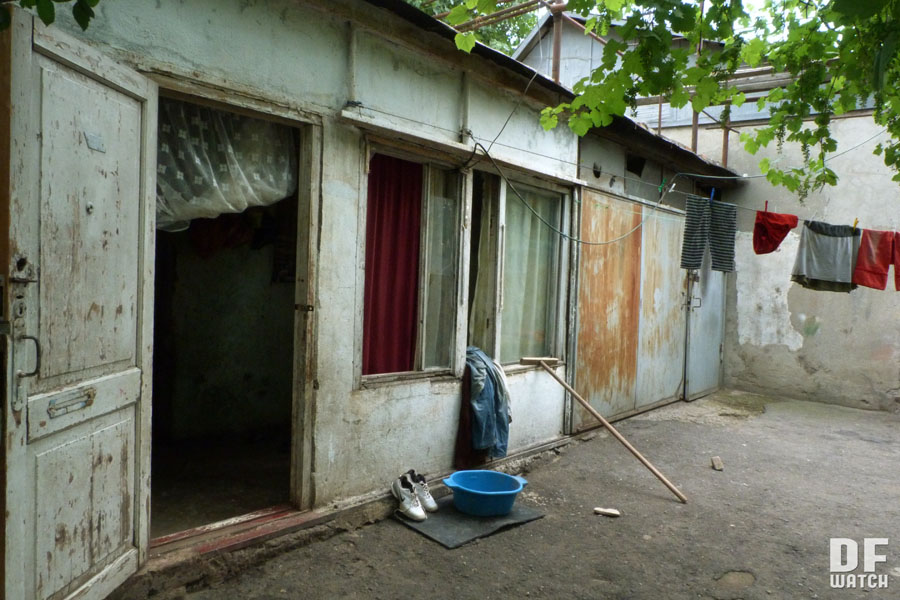 Nato Gagnidze, chair of the organization, says that this is a real problem, which the organization is fighting in tandem with the Justice Ministry. She tells about a project called Reducing Cases of People not Having Citizenship and Prevention of not having citizenship in Georgia.

One of the beneficiaries of this program is the Roma people. Within the frames of the program, people don’t have to go to any body to get ID documents. Program associates are visiting families and helping them.

But she says sometimes there is a problem, as Romas don’t want to be contacted. They feel that they are doing OK.

The NGO is looking for people without documents and helping them.

Alimov’s family tell us that at the hospital, Romas are allowed to give birth to a child and then let home without any documents. That’s why their children do not have birth certificates.

Nato Gagnidze confirms that such a problem really existed, but that was ten years ago.

“But after 2004, it is impossible to be let to go home, even let into the hospital, without documents and passports.”

This may be the reason why the mother in the third family we visited gave birth to all her fifteen children at home.

On our way to Africa, which is suburb in Tbilisi, we meet 11 year old Darina, who is happy to see our cameras and asks to be taken photos of. She introduces us to her brother and sister, who also brought other children with them to meet the strangers.

There is a small path behind Public School Number 94. There are newly built houses behind the school and hard to imagine that you will find a small house built with leftover wood and bricks, with tarpaulin and rocks as a makeshift roof.

The mother says she has a little potatoes in her garden and sells some products in the market, but this is not enough, so all her children are begging for money in the streets.

In the beginning she got angry when she saw us taking pictures.

“They come here from the media, take pictures and so what? Nothing. My life hasn’t changed, no one helps us.”

But then she calls us back asking what choices she have, where she should go to get social assistance and how much it will cost to register her children, who want to go to school.

As ombudsman writes, Romas have too many problems in this regard. They don’t know how to read and write, because the majority of children are begging in the streets, they aren’t informed about the education system.

“The majority of such cases is caused by the fact that parents do not understand the necessity of their children’s education. They prefer that their children sell products or beg for money, which is caused by very difficult social conditions.” 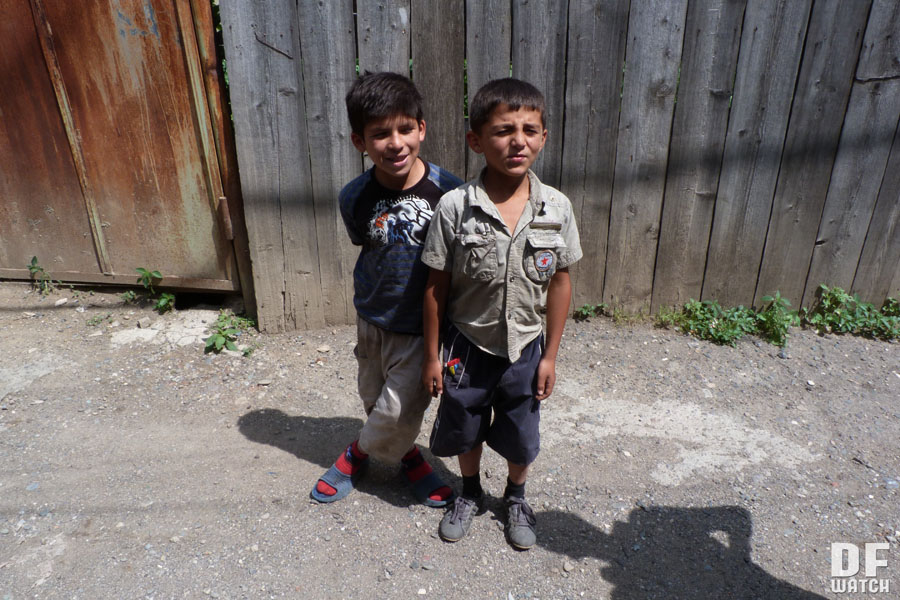 In addition, not having documents, books and clothes create additional problems.

Darina would like to go to school like her brothers and sisters, but she says she doesn’t have the time. This is not the only family where children express their desire to study.

On May 26, when Tbilisi City Hall held a Georgian Industry Parade on the main street in Tbilisi, we met Roma children who were sitting at specially arranged tables with pencils and papers. Some drawing, some asking to be taught how to write their name in Georgian. They spent the whole day together with other children, painting and writing. Their elder sisters didn’t force them to beg for one whole day.

The Public Defender writes that stereotypes still isolate Romas and people have negative attitudes to them.

People think that they are only begging.

“But in most cases, Romas do not beg but trade, do fortune-telling and follow agricultural activities.”