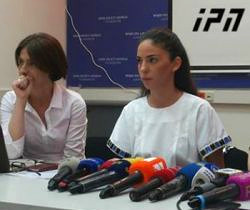 TBILISI, DFWatch–The National Forensic Bureau has confirmed the authenticity of an audio file which appears to show that a well-known Georgian journalist threatened to ruin the career of an actress working for him if she did not sleep with him.

Tatia Samkharadze claimed April 8 that her producer, journalist Shalva Ramishvili, threatened to end her career if she did not respond to his sexual approaches. She said she was in possession of an audio recording where Ramishvili promised to stop harassing her. But the harassment didn’t stop, and she therefore quit her job.

“It is not right when girls go to a TV company and are told that their career can only succeed through someone’s bedroom,” she said then.

Samkharadze, who is also known as Taso Barnova, said on Monday that now that the authenticity of the audio file has been confirmed, her lawyers will file a lawsuit against Ramishvili.

After Samkharadze spoke up about being harassed at work, several other girls working for Imedi TV admitted they had the same problems with Ramishvili.

Shalva Ramishvili, the host of the talk show Politics, was fired by Imedi on April 5.

“I am aware that some of you do not like me and even hate me. I haven’t lived the life of a saint, but have never been violent. I want to remind everyone that the Constitution and laws protect every citizen, including me, and including the presumption of innocence. Accusations against me are part of a campaign. Everything is like a staged scenario,” Ramishvili wrote on his Facebook page.