Hailstorm victims to get compensation

Hailstorm victims to get compensation 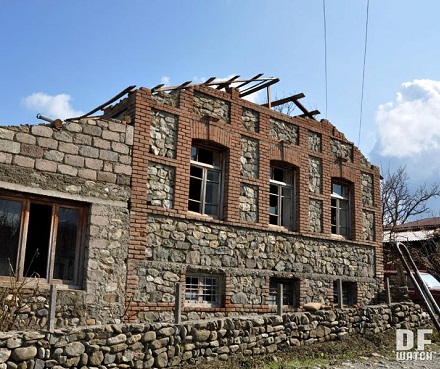 The storm in Georgia in July 2012 ripped the roof off many houses. (DF Watch photo.)

TBILISI, DFWatch — The victims of a hailstorm in Georgia last summer will finally get compensation, ranging from USD 3 600 to USD 4 800.

Davit Narmania, Minister of Regional Development and Infrastructure, said Monday that the loss was estimated in such extreme detail as never before.

A few of the victims attended the press conference and symbolically signed a form accepting the assistance.

“Now the process starts to open bank accounts for all 28 500 affected families. As soon as this is done, we will start handing out compensation,” the minister said, adding that the process of mending the roofs in affected villages has also almost finished and will be revised again if anyone is left with a damaged roof.

If a person had larger lands and was affected more than others, then he may receive more than USD 4 800.

A list of affected families was Monday sent to Cartu Foundation, affiliated with Prime Minister Bidzina Ivanishvili, in order to open bank accounts and disburse compensation.

Cartu Foundation will distribute the compensation. The company informs that in order to avoid queues and crowds at local banks, families will be told when money has been transferred to their accounts. Local government will release lists before the distribution of money.

Citizens will have to go to the local branches of Cartu Bank.

USD 60 million was allocated in order to cover the losses of the damage affected by the hailstorm. USD 3 million of it was to mend roofs of damaged houses.