Growing tension between Christians and Muslims in Adigeni

Growing tension between Christians and Muslims in Adigeni 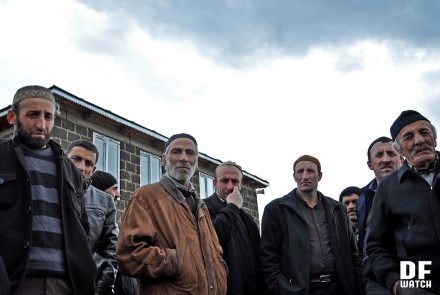 TBILISI, DFWatch–There is growing tension between the Christian and Muslim communities in the small village Adigeni, west of Akhaltsikhe.

The Samtskhe–Javakheti region, where Adigeni village is located, was historically known as Meskheti, after the Muslim Meskhs. But when the Meskhs, who once were the majority of the region’s population, suffered mass deportation at the hands of Soviet authorities in 1944, the area was settled by environmental migrants from different regions of the country.

Adigeni’s Muslim community are mostly descendants of Adjaran Muslims, while local Orthodox Christians usually trace their roots back to Racha. The region is also populated by a small Catholic minority which was spared from deportation during Stalin’s population transfers.

Both communities are ethnic Georgians and native Georgian speakers.

The conflict in Adigeni village stared with a disagreement about the local cemetery — a tiny piece of land on the outskirts of the village. The Muslim minority asked the local authorities to allocate a separate space for burying Muslims at the cemetery, as their funeral traditions differ from those of Christians, who often bring alcohol with them while visiting the graves. 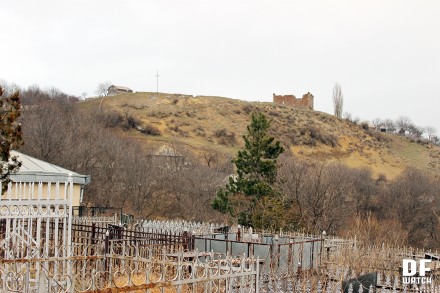 Local Orthodox Christian majority saw the initiative as an attempt at Islamization of the village’s public space and voiced their resistance.

An investigation was launched into the cemetery case, which is now completed. Three weeks ago, six people were fined 100 laris for swearing and scolding in a public space, insulting citizens and other administrative offenses.

An investigation was also launched pursuant to the Criminal Code, article 156th about persecution for freedom of opinion, speech, religion and belief, but in the end, investigators couldn’t find any evidence of a criminal offense.

Samkhretis Karibche, a local media outlet in South Georgia, quoted the lawyer Shota Tutberidze, who defended the rights of Muslims injured during the clash in Adigeni, who said that the decision was ‘unlawful’ and ‘unfair.’ He claims that there were signs of violation of the Criminal Code in this case.

Now, the lawyer is trying to grant have his clients recognized as victims. The prosecutor rejected their claim to victim status, but the lawyer appealed the prosecutor’s decision to the chief prosecutor and now they are waiting for the response. Even though the case is closed, it is still possible to get victim status and reopen the case.

“We will use every way to find justice and even file a case at the Strasbourg [European] Court of Human Rights.”

An investigation was launched after the clash, which happened on February 29 in 2016. 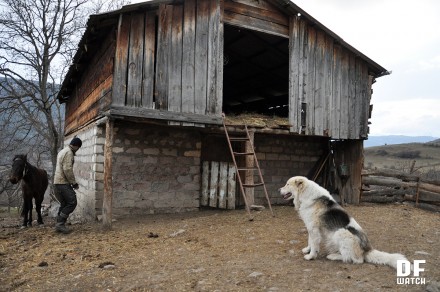 Christian resistance to public displays of Islamic faith in Adigeni region is grounded in a perception of history in which Georgia fell victim to Muslim empires who attempted to uproot Christianity in the country in order to quell Georgian national identity.

As a part of the Ottoman Empire since the 16th century, the majority of the population of the neighbouring region of Adjara adopted Islam, which became a powerful symbol of Muslim influence in mainstream Georgian nationalist imagery, which links the Georgian nation and statehood to the Christian Orthodox faith.

This nationalist narrative translated into a widespread anti-Turkish sentiment in southwest Georgia. Many local Christians openly question the Georgian government’s close political and economic ties to Turkey, seeing it as a part of a Turkish plot to re-establish its influence in the region and to strengthen the presence of Islam.

The local Muslim community is the one which most often falls victim to the anti-Turkish sentiment. Although the coexistence of the communities is for the most part peaceful, tensions escalate when Muslims try to make an impact on the region’s public sphere by opening mosques, prayer rooms, or religious schools, a development which is often seen by the majority as a covert expansion of Turkish interests. 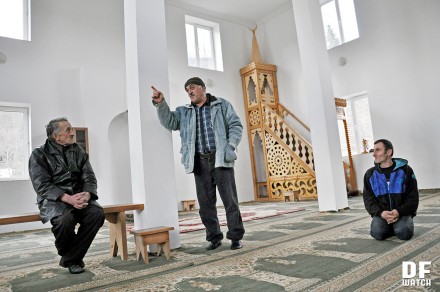 The minaret in the village Chela has become a focus point of the antagonism between the two communities in the Adigeni region.

The conflict escalated in 2013, when local Muslims erected a minaret at the village mosque, which was subsequently dismantled by local authorities following fierce protests by the local Christian community.

“When we asked the protesters why they wanted the minaret to be taken away, they said that it was installed by Turkey with ‘broadcasting equipment’ inside it. They said it was the way for us to conduct clandestine communications with Turkey’,” Pridon, a local Muslim man tells us.

“We told them that they could send specialists who would inspect the minaret for hidden equipment. They said they would take it away first and then conduct necessary inspections.”

Local authorities sided with the protesters and decided to dismantle the minaret. When an unarmed group of Muslims tried to stop the process, some people were beaten, handcuffed, and detained by the police.

Simon Parunashvili, the region’s gamgebeli, or head of local government, who ordered the dismantlement, was detained by police a day after and charged with exceeding his powers and negligence. He was later acquitted by the court.

“All of it is happening because of Islamophobia. Even if the president of the United States makes anti-Islamic statements such as that Islam equals terrorism… Terrorism is unacceptable in Islam! I’m 58 and I’ve been Muslim for my whole life, as were my ancestors. Would I be this if this religion wasn’t about humanism and the love of mankind?” Pridon asks rhetorically.

After the minaret was restored towards the end of 2013, there have not been major clashes, although local men admit that relations remain tense.

They say that during Muslim holidays, it is customary for them to distribute sweets to the village’s children, no matter their confession. But they claim that during Christian holidays, the Christians give sweets exclusively to Christian children. 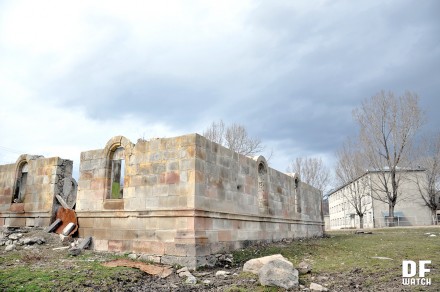 Local Muslims are keen on stressing their Georgian national identity and loyalty towards the Georgian state, which is often put in doubt by their Christian neighbours. They often bring up examples of their family members, who served in the military, patrolled the Abkhazian boundary line, or participated in the 2008 war in South Ossetia.

They are, however, often called Tatars — an old Georgian name for Turks and Azerbaijanis, which currently functions more of like a slur.

Some members of the clergy have openly voiced the widespread sentiment that ‘Muslim Georgians’ simply don’t exist.

“We’re all of same flesh and blood, us and Christian Orthodox Georgians. Our country has always been famous for its principles of tolerance as preached by Davit the Builder and Queen Tamar. Our constitution says that Georgia is a secular state — not theocratic, and it gives freedom of religion to its citizens.”

These people are causing harm to whole Georgia. It’s the question of our prestige. Georgia wants to become a part of the European family and to enter NATO in order to secure order and peace. 90 percent of the population knows that we need it in order to be protected from our aggressive neighbour. What about people violating the freedom of religion? They’re insulting their own country,” Pridon argues.

The case of ruins of an old mosque in the village of Mokhe shows that local administration has a major role to play in shaping relations between the communities. Two years ago Muslim and Christian population in the region clashed because of the ruins of Mokhe mosque. Muslims from the village Mokhe today gather in a building, which is actually a house redesigned as a mosque. The reason is that they cannot get permission to restore the mosque from the ruins, or get permission to build a new mosque. The building ruins remains disputed, while there is no other mosque in the village and the building where the Muslims are praying today, belongs to one of the locals and it used to be a house.

A special commission created to determine the origins of the building and whether it belonged to Christians or Muslims has not yet done anything. The conflict remains frozen with both sides claiming that the building belonged to them.

The conflict started in October 2014, when the workers hired by the local municipality showed up at the site of the mosque with a plan to turn it into a culture house and the Muslim community resisted. 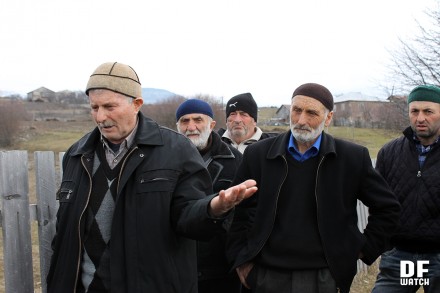 When we met the Muslim community in Mokhe during our last trip, they couldn’t remember any confrontation in the village with Christians in the past, before the Mokhe conflict erupted. There are roughly 40 Muslim and 20 Christian families in the village.

When we came to Mokhe, Muslims told us they are not informed about what is happening regarding the ruins, what decisions are made.

“This building has been without a roof for so many years. Horrible things happen there and no-one cares,” Onise Vanadze tells us. He cannot understand the reason why they are not allowed to reconstruct the ruins.

“In the past, no-one cared about Christianity or anything. They were persecuting us all. But now, the government is protecting Christians and harassing us Muslims.”

Onise, a Georgian language teacher at a local school, says the government never prevents the Orthodox community from constructing new churches anywhere they want, as much as they want, but doesn’t allow Muslims to reconstruct what was already built, which is why he thinks that they aren’t protected.

Muslims in Mokhe remember that in most of the cases recently, when their community was in a conflict, violations have have not been properly punished, with people released and just given a small fine, which encourages new crimes and hatred.

“We have never ever had any conflict in our village before.”

Some of the Muslims in Mokhe believe that the conflict is also encouraged by the local priests, particularly from Zarzma Monastery.

“Nikoloz [Archimandrite] chose our municipality head. Everything is controlled from there [church]. The priests have become more powerful recently. The government is weaker, and you see, everything here is done the way Nikoloz wants. Of course you cannot do anything about it,” Temur Mikeladze tells us. 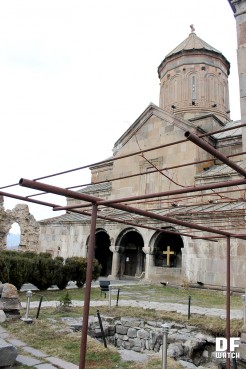 Zarzma monastery is seen by many Muslims of Adigeni as the epicentre of the anti-Muslim sentiment in the region.

It is located in the eponymous village across the Kvabliani river, on the other side of Chela. Georgian sources track the origin of the monastery to the 8th Century, with the extant edifice dating back to the 14th Century. The monastery became disused following the Ottoman conquest in the 16th century and restored only in early years of the 20th Century.

Archimandrite Nikoloz Getsadze has been accused of instigating the situation by siding with anti-Muslim activists in Chela under pretext of democracy, understood as the will of the majority.

“Muslims live here, but they are guests and their religion is a guest too. Let them live by the rules which are established here and not summon loudly to come and pray at the mosque and not disturb the local population,” DF Watch quoted him saying during the minaret crisis in 2013.

Unfortunately, we were unable to meet him during our last trip. Other representatives of Zarzma’s clergy steadfastly refused to talk to journalists without the archimandrite’s direct permission.

“Look outside the monastery. There are children playing. Some are Christian, some are Muslim… There is no conflict at all,” one priest tells us when we ask about the tensions in the area.

Only when he’s seeing us off, he gives a loud sigh and says: