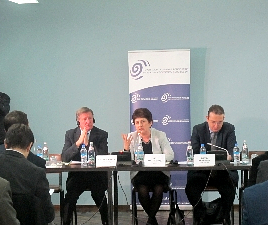 TBILISI, DFWatch–Non-governmental organizations on Friday presented a report about how Georgia is doing in fulfilling its requirements under an association agreement signed with EU in 2014.

The report outlines progress in some fields, but also problems which remain unresolved.

The report covers the period from September 1, 2014 to September 1, 2015 and deals with the court system, reforms in terms of corruption, the fight against torture and mistreatment, labor rights and children’s rights.

The last chapter recalls that child poverty, street children and child labor are challenges that haven’t received much attention from the government. These issues have not been addressed as a priority during budget planning.

Further analyzing a UNICEF survey covering the year 2014, 28 percent of children are living in poverty, including 6% of children who live in extreme poverty and have less than 2 GEL per day (less than 1.25 USD) to live on.

“The main problem for more than half of households with children (52%) is unemployment, while 11% are unable to pay debts or loans. Almost two-thirds of the children who live in poverty (64%) come from families where none of the members have a regular income,” the report reads.

A UNICEF survey for the year 2013 described another problem: that 60% of those questioned in Georgia believed that violent forms of punishment are a more effective form of parenting than non-violent parenting techniques, and 45% of respondents believed that the use of physical violence against children is acceptable and that children raised without physical punishment are ‘spoiled’.

Georgia also has work to do dealing with forced labor and child trafficking. According to a U.S. State Department report, ‘Georgia is a source, transit, and destination country for men, women, and children subjected to trafficking in persons, specifically the forced prostitution of women and the forced labor of men, women, and children. Some street children may be subjected to forced begging or coerced into criminality.’

Keti Khutsishvili, Executive Director of Open Society Georgia Foundation, which supported the making of the report, said during the presentation that Georgia never finished implementing  the reform of the Prosecutor General’s Office, and meanwhile, the process of selecting judges remains vague.

She underlined that progress has been achieved when it comes to how the justice treats minors, as the legislation has been improved in this area.

In a separate chapter about the prison system, the report’s authors write that the Prison Ministry is very careful about setting up a civic supervisory mechanism in prisons, but on the other hand there have been taken positive steps in the prison system over last two years, like improving prisoners’ access to medical services.

In an overall assessment, the report criticizes weak and uncoordinated cooperation among bodies responsible for the same activities.