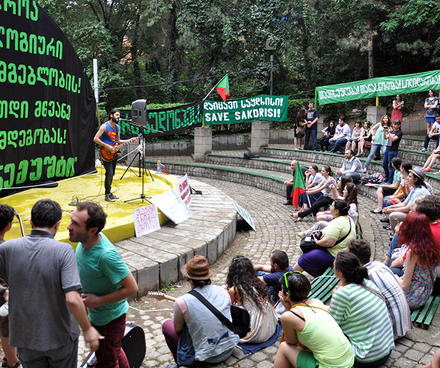 The concert was held at Mziuri Park. (DF Watch.)

They are all problems caused by the government’s economic policy, according to the youth group Green Fist.

Green Fist has gathered together over the last year to protect people, nature and heritage. The Khudoni, Sakdrisi, and Kazreti cases are problems caused by a policy to extract resources to the max, they argue. (DF Watch.)

At a demonstration in Tbilisi on Sunday, the young environmentalists brought colorful banners and other paraphernalia to highlight what they see as the root cause of such diverse issues: a policy to extract natural resources at maximum speed, disregarding the impact on health and safety, social conditions, nature and heritage.

The youth gathered in Vake Park, marched down Chavchavadze Avenue and to Mziuri Park, where a concert was organized.

It’s the second time Green Fist holds a demonstration against the policy of maximum resource extraction. On the same day last year, they gathered in Deda Ena Park, which activists say was the first demonstration of its kind in Georgia.

Spokesperson Mariam Gurgenidze tells DF Watch that there is slight improvement in some of the issues they have been working with, but still many things need to be changed in the country when it comes to protecting the environment and cultural heritage, as well as workers’ rights.

Gurgenidze says they have been joined by many new people in the last year.

Addressing specific problems, she says there has been no change so far in the social problem in Kazreti, a small mining town in the south of Georgia. Many of the people living there work in the gold and copper mines, and this year almost the entire town went on strike to protest against working conditions, low salaries and the firing of tens of employees.

Mariam says people’s attitude has changed and locals have begun to be more forceful about ecological problems in their local surroundings.

Positive changes are seen also in the threat to an ancient gold mine called Sakdrisi, which was in danger of being destroyed by a Russian mining company.

“We still don’t know what will happen to it, but currently the situation seems in favor of Sakdrisi,” she tells us, adding that during the year more people have learned about these problems and started to care.

“The less rallies will be necessary to conduct in the future, the happier we will be.”