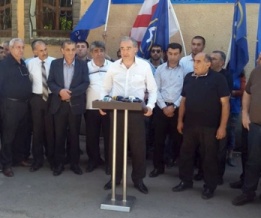 TBILISI, DFWatch–A candidate for Georgia’s governing coalition in a town south of the capital has announced that he is withdrawing from tomorrow’s local election. The coalition earlier said he would withdraw.

Merab Topchishvili was Georgian Dream’s candidate for gamgebeli, or head of municipality, in Marneuli, 30 km south of Tbilisi, but the coalition announced that he would withdraw.

Initially Topchishvili said he was planning to continue and didn’t want to withdraw, but Friday he confirmed his own withdrawal from the race.

“I respect and agree with the decisions of Georgian Dream,” he said.

“Me and my supporters will fight for the victory of Georgian Dream’s majoritarian candidates,” he added, using the term for members of a local assembly elected by  the one past the post system.

The deadline for formally withdrawing passed ten days ago. Topchishvhili’s name will be on the voting-papers, and votes cast for him will be counted and go to the Georgian Dream coalition.

The candidate of the former ruling party, National Movement, had his candidacy canceled earlier, but got it restored by appealing in court. The party claims the Central Election Commission acted politically when it canceled Imamkuliev’s candidacy.

The party claims that the government coalition afterward took its candidate out of the race to avoid losing. The coalition said it withdrew to avoid ethnic tension and to help Azeri candidates.

Marneuli is 83% Azeri and two opposition candidates are ethnic Azeris.