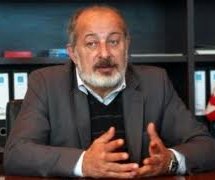 When director Nodar Javakhishvili and the rest of the management of Cartu Bank regained control, they discovered that the government's people had taken USD 50 million in loans, started an expensive refurbishment project, and given premiums to employees, which they believe was done to hurt the bank financially. (IPN.)

TBILISI, DFWatch – While the opposition affiliated Cartu Bank was temporarily under state management recently, USD 50 million was taken in loans.

The bank, which is associated with President Saakashvili’s main competitor Bidzina Ivanishvili, plans to go to court against those who took these loans, as the money appears to have disappeared.

Cartu accuses an adviser to the President of the National Bank and one other person, who for a short time was compulsory manager, claiming that during the compulsory management there were signed credit agreements with four companies to the amount of USD 50 million, which puts the bank’s liquidity in danger.

After Bidzina Ivanishvili’s 100 percent stake in Cartu Bank was temporarily seized because of an outstanding fine, the entire management, including the director, were fired and a caretaker manager was appointed. But then the businessman paid the fine, and the director, Nodar Javakhishvili, got his job back.

Now, Javakhishvili claims that during the management’s absence, the temporary managers signed agreements placed Cartu Bank in debt by borrowed money from four companies, to the amount of USD 50 million, money which has not remained in the bank.

The director says that if the bank will not pay back the money it loaned from those companies, then the National Bank’s temporary administration should come back to the bank.

Cartu Bank has now taken the case to Tbilisi City Court and demands to abolish the loan agreements with the four companies, most of which are construction companies.

The bank’s view of the situation is that it is a deliberate attempt to destroy it.

This is not the only action implemented by temporary managers, but they also started reconstruction of a branch in the town Telavi, gave away premiums to employees and other actions, in order to hurt the bank financially.

The bank’s problems started right after Bidzina Ivanishvili declared his goal to enter politics for the upcoming elections.