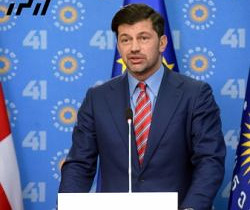 TBILISI, DFWatch–Georgian Prime Minister Giorgi Kvirikashvili on Friday announced a cabinet reshuffle which lets two GD politicians dedicate their time to campaigning as less than a month remains before a parliamentary election where no party or bloc is likely to win a clear majority.

Former professional footballer Kakhi Kaladze will be leaving his job as energy minister in order to fully dedicate himself to the election campaign. The outgoing energy minister, whose recurrent beard growth is now fully cleared away, is number two on the ruling Georgian Dream’s party list.

Also the agriculture minister,Otar Danelia, is leaving his government position in order to dedicate himself to the election campaign, the prime minister said Friday. Danelia is a majoritarian candidate in the Abasha and Martvili district.

The October 8 election is the last time Georgian voters are asked also to select individual candidates from single-mandate districts called majoritarians, in addition to the party lists.

At the Agriculture Ministry, the ministerial position will be passed to Levan Davitashvili, the former deputy minister.

In the same vein, deputy Ilio Elisashvili will advance to the top position at the Energy Ministry, Kvirikashvili announced.

“I am delighted to introduce professional and honorable people on two important posts. I want to wish them success and also to thank the ministers, who from now on will get involved in the election processes,” Kvirikashvili said.