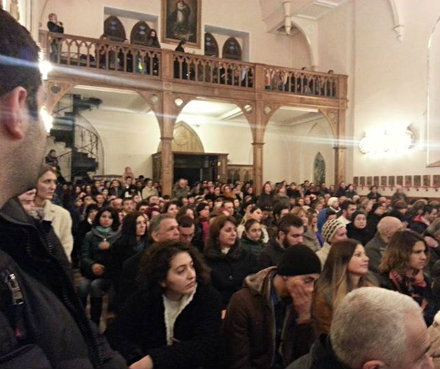 Midnight Mass at The Assumption of the Virgin Mary Church in Tbilisi. (DF Watch.)

The ceremony started at 23:30 and Giuseppe Pasotto, Apostolic Administrator of the Caucasus, conducted the prayer.

“I want to wish everyone that this day will became important. I wish all a Merry Christmas,” Pasotto told journalists before the prayer and also congratulated the Orthodox church on the upcoming Christmas.

The Georgian Orthodox Church, like the orthodox churches of Russia and Ukraine, is following the old Julian calendar, according to which Christmas is on January 7.

Narmania said he came to congratulate his brothers and sisters with Christmas and wish them happiness, well-being and strength.

“There is no bigger celebration for Christians than Christmas,” Subari said and congratulated Catholics with Christmas.

“Each Christmas is a belief and hope for better future,” he writes.

“On this great Christian celebration we hope for renewal and a bright future,” Margvelashvili wrote.

According to the most recent data, less than one percent of of the population in Georgia are Catholics, about 10 percent are Muslims and four percent Armenian Christians. More than 83 percent are adherents of the Georgian Orthodox Church.

New data will be published in April 2016 based on a population census conducted in November 2014.