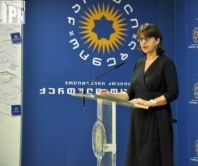 Two officials in the Council of Europe’s Parliamentary Assembly expressed concern about the seizing of bank accounts of parties which are members of the Georgian Dream coalition.

A statement released by the government on Wednesday characterizes the Council of Europe’s Parliamentary Assembly as lobbyist for Bidzina Ivanishvili, leader of Georgian Dream.

“The Georgian government categorically refuses the accusation by Georgian Dream lobbyist as if the government has frozen Georgian Dream member or related political parties’ bank accounts. None of the party accounts are frozen,” the statement reads.

The government’s statement also says that Georgian Dream violated the law by creating an illegal scheme to finance its own election campaign. The leaders of the coalition openly stated that they won’t obey the law, the government adds.

According to them, the State Audit Office has many times presented clear evidence of Georgian Dream’s transgressions, based on which the courts fined the coalition and its partners for violating legislation regulating campaign financing.

“In the specific case raised by Georgian Dream’s lobbyists, the National Bureau of Enforcement (NBE) enforces the writs issued by Tbilisi City Court’s decision of June 27, 2012. The court found members of the political coalition Georgian Dream in violation of party financing legislation and collectively fined them with GEL 2,850,717.06. The collection order allows the NBE to enforce the court’s decision without freezing the accounts; thus, without interruption of the cash flow or otherwise use of the account.”

The statement says that only part of fine is so far withdrawn by the National Enforcement Bureau – 122 000.00 lari.

The statement reads that officially Georgian Dream has raised 730 000 lari in the last few months. Only 17 percent of it has been collected in order to enforce the fine.

In general, since November 1, 2011, until July 25, 2012, Georgian Dream has raised 44.539.123 lari (more than 26 million legally and more than 18 million identified illegal contributions). It is therefore not a 122,000 lari collection of fines (less than 0.3 percent of total income) that can prevent the Georgian Dream coalition from campaigning all over Georgia.

“Throughout its election campaign, Georgian Dream affiliates have willfully ignored the boundaries of the law and have even publicly claimed to do so. These false allegations are the latest in a series of attempts by Georgian Dream to discredit Georgian institutions in advance of the October elections. The government calls on all parties to refrain from a campaign of slander and to focus on electoral objectives rather than trying to preemptively discredit the outcome of the elections.”

Georgian Dream’s spokesperson responded at a briefing today that the coalition is concerned about the government in its statement names PACE as a Georgian Dream lobbyist.

“The assembly will confront this statement, will protest and criticize,” Maia Panjikidze said, adding that the figures named in the statement don’t fit with reality.

She said the coalition has received 10.5 million lari in donations since November 1, 2011.

“The 44 539 123 lari named in the government’s statement is the total of Georgian Dream’s donations and all the fines which the audit office illegally applied to Georgian Dream,” Panjikidze said.

She said following decisions by the National Enforcement Bureau, it applied a collection of party accounts and transferred 122 000 lari – donations in August – to the state.

“This created a danger to the political activity of the coalition.”

Maia Panjikidze presented documents to journalists, which proves that the coalition’s accounts are seized.