Give us back our rights

Give us back our rights 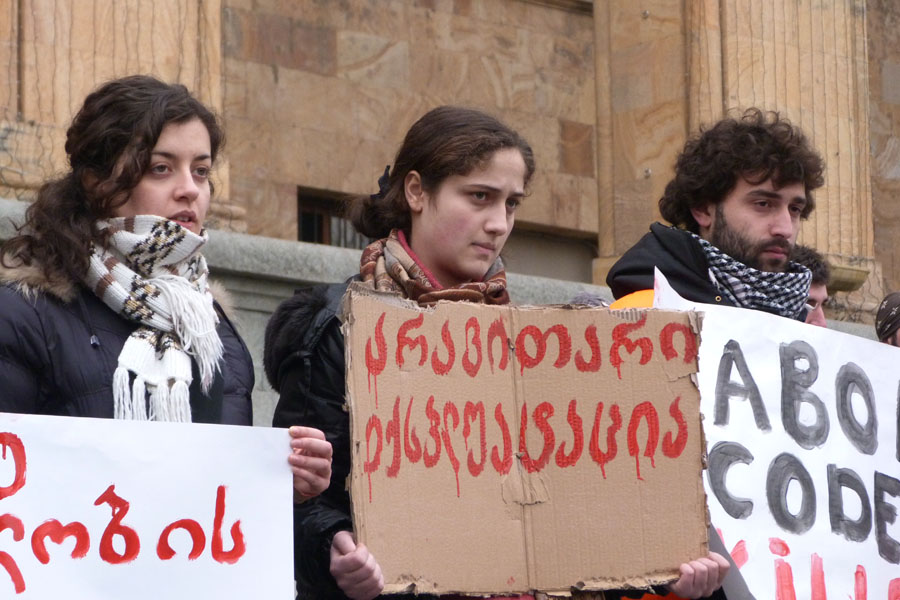 TBILISI, DFWatch – The government in Georgia removed almost all labor protection in 2006. Now there is a growing movement to reclaim the lost rights.

Labor rights campaigners demonstrated in Tbilisi Tuesday against the lack of proper protection.

People gathered near the Rustaveli statue with flyers and painted posters with slogans like ‘Labor Code – Code of slavery’, ‘No exploitation’, ‘I was fired for being pregnant’ and ‘Solidarity with the Kutaisi workers’.

The rally was organized by the Georgian Trade Unions and the youth movement Laboratoria 1918, which demand that the government amends the Labor Code, specifically the articles number 37 and 38, which entitles the employer to fire the employee any time, for any reason, without even explaining the grounds for being fired. 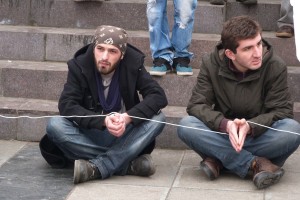 Some tied their hands together as a sign of protest. (Photo: Mari Nikuradze.)

In 2006, the government amended the Labor Code despite a number of recommendations and criticism from international and local organizations and trade unions.

The government’s goal was to attract more investors to Georgia through the ‘simplified’ Labor Code, which would create comfortable conditions for them to arrive here in Georgia and invest money. The aspect about attracting investors has been borne out by later events.

But the simpler law has also led to a rougher life for the workers. According to the current labor code, employers are granted many rights and have few obligatory, while employees have no means with which to defend themselves in case of discrimination, firing without explanation and other problems.

“The court recognizes the absolute domination of the employer,” one of the activists says.

A Trade Union representative says that many workers who go to court after having been fired, or because of violation verbal or short-term contracts, cannot defend themselves and are left without jobs and compensations.

“Article 37 not only doesn’t give the right to an employee to protect his rights, but allows for discrimination in this area,” Irakli Petriashvili, head of the Georgian trade Unions said today during the rally.

“Firing from work may happen because of being a woman, having different colored eyes, being pregnant, being ethnically the representative of a different group, being a member of trade unions, or because of some party [political] opinion.” 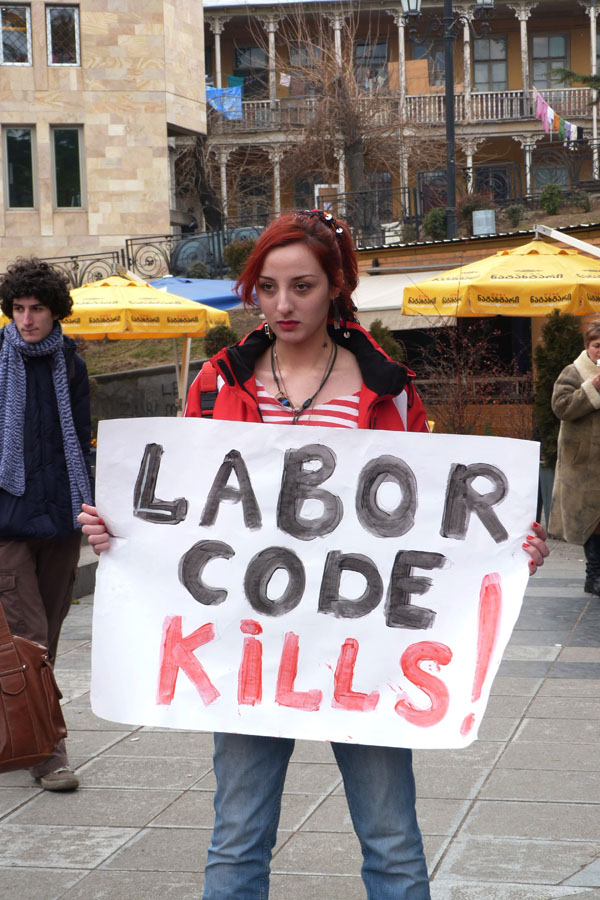 Recently the leader of the Republicans party held a press conference about the mass facts of firing teachers for having different political beliefs. The teachers also attended the press conference and told their stories of being fired without explanation.

“It happened in the secondary school in Gori, where there was discrimination for political reasons. My mother was fired,” one of the activists remembers. “It was because of my father’s political activity. He is a member of some party.”

He says that it happened when his mother didn’t support falsifying the elections during the local elections and prevented this process. After this, the political persecution began, he says. The first attempt to fire her was in spring 2011. The director didn’t sign the document firing her, so the director himself was fired, but later another director fired her without explaining anything.

The organizers and several supporters tied their hands as a symbol of being chained by the current labor code. Lately, the whole rally moved to the front of the parliament building on the way to which the activists were yelling different slogans, displaying posters with various messages.

The activists also remembered what happened this summer, when workers at a metallurgical plant in Kutaisi, western Georgia, went on strike demanding improvements in their working conditions. As a result, many of them were fired and detained, and three of them were forced to sign a declaration where they promised to never go on strike again.

“This code cannot be called a law and parliament shouldn’t adopt such a law. The government is obliged to defend the rights of the employees. The right to work is a basic human right and the current code contradicts the Georgian constitution, contradicts the European Social Charter, and other international obligations which our country has undertaken,” Ani Chankotadze, one participant at today’s rally, says.

According to the organizers, this protest was not a one-off. The rallying will continue, they say.

“Not only these two articles [of the labor code], but almost every article is directed against the employees,” Gocha Kvitatiani from the Trade Unions tells DF Watch.