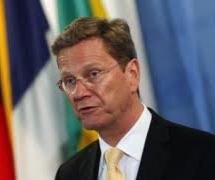 TBILISI, DFWatch — Germany wants to play a positive role in the process of restoring relations between Georgia and Russia, says Georgia’s Foreign Affairs Minister after meeting with her German colleague in Germany.

According to the foreign ministry, Foreign Minister of Germany, Guido Westerwelle, invited Maia Panjikidze to come and visit.

The meeting lasted long, and the two discussed many important issues, including Georgia-Germany relations, and Georgia’s relations with the EU and NATO.

“That’s why before the visit to the Russian leadership, our German colleagues were interested in how we plan to improve relations, what signals there are from Russia and what are the chances,” Maia Panjikidze says. “We provided full information and Germany expressed a wish to play a positive role in these relations.”

Maia Panjikidze invited Guido Westerwelle to come to Georgia. Her German colleague accepted the invitation and will come to Georgia in the near future.

When the new government was accepted and confirmed, officials said that it is impossible to restore diplomatic relations with Russia as long as there are Russian embassies located in breakaway South Ossetia and Abkhazia; however Georgia plans to start lighter type relations in the fields of culture and economy.