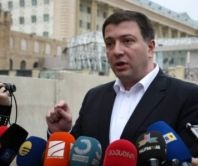 Tbilisi Mayer Gigi Ugulava can vouch for Shota Khizanishvili and is willing to stand bail for him. (IPN.)

TBILISI, DFWatch — Former Deputy Interior Minister Shota Khizanishvili was on Sunday given pre-trial detention until the start of the court case on December 28.

Khizanishvili, who is currently Deputy Mayor of Tbilisi, was detained November 15 for abuse of powers and having illegally obtained private information and used it for political goals.

His lawyers asked the judge to release him for USD 12 000 bail, while Tbilisi Mayor Gigi Ugulava offered to stand bail for him, but the court refused and sentenced him to detention.

The same ruling was issued regarding Vazha Leluashvili, Deputy Director of the Constitutional Security Department of the Interior Ministry.

Leluahsivli was charged with obtaining secret audio and video recordings of private conversations, some of them by phone. The court denied him release against bail and decided that he must be kept in preliminary detention until the trial.

Tengiz Gunava, Former Chair of the General Inspection at the Interior Ministry, was released against a USD 6 000 bail. His lawyers had asked for his release against USD 3 000 bail; and the court granted bail but doubled the amount.

Gunava was detained for possession and use of drugs, but when he was detained, former Interior Minister Vano Merabishvili commented that Gunava is a symbol of the fight against drugs in the Samegerelo region in western Georgia.