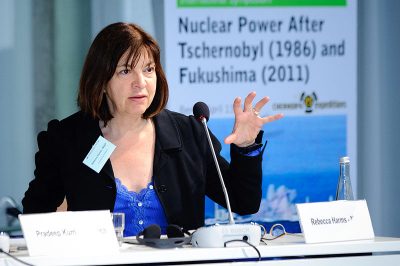 German politician and Member of the European Parliament (MEP) from Germany has expressed her solidarity to an embattled university in Georgia, which is under fire for its alleged links to U.S.-based Turkish cleric and a personal foe of President Erdogan.

“Stand for International Black Sea University! And please sign the petition. Don‘t allow Erdogan to weaken rule of law in #Georgia,” wrote Rebecca Harms, MEP, on her twitter on Thursday.

She shared a petition on Change.org calling to abolish “the unauthorized decision against IBSU”.

The Georgian government in August cracked on the International Black Sea University, one of Georgia’s leading higher educational institutions, by banning it to enroll students for academic year 2018-19.

This effectively means huge, mainly financial, problems for the university.

Altogether about 800 MB, MA and doctorate students have been affected by the decision.

Although the IBSU staff is reluctant to talk openly on the issue, it is widely believed that the move is being related to the ongoing pressure by Ankara to Georgia and other countries to shut down educational institutions associated with Fethullah Gulen, a popular Islamic cleric which currently resides in the U.S. and sought by Ankara for alleged masterminding failed state coup attempt in July 2016.

The reason behind this timid response to the government is that some of the key people in the university, mainly Turkish nationals, fear their extradition to Turkey where they may face criminal charges and even prison terms, a person close to IBSU administration said to DFWatch.

These fears seem to be well substantiated as one of managers of the Demirel college, which is a part of Gulen-linked educational ring in Georgia, was detained in 2017 in Tbilisi by the orders from Ankara. The Georgian government pondered about nine months on whether to extradite him to Turkey and released him in February after immense pressure by local and international human rights groups.

Rebecca Harms voiced her support to Mustafa Emre Cabuk, the detained manager of Demirel college, multiple times. She also visited Cabuk in the prison cell two days prior to his release.