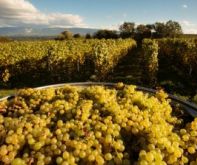 TBILISI, DFWatch–Georgia produced 12.6 percent more wine in 2013 than in 2012, according to the government’s international monitoring center.

The monitoring center does noe say how much of the growth was due to natural variations. As previously reported by DF Watch, 2013 was the best grape harvest in Georgia for decades.

The worst period for Georgia’s wine export was in 2006, when Russia imposed an embargo on Georgian products and after that the failure continued during 2007-2010, the monitoring center informs. The wine export rate in 2012 was two thirds of the export in 2005.

After the change of government in October 2012, the new government started talks with Russia to resume export, at least for Georgian wine, and for the first time after the embargo Georgian wine returned to the Russian market.

Even though Georgia exported wine to 47 countries in 2013, 70.7 percent of it was exported in Russia and Ukraine. On the top of the list of receiver countries are Belarus, Poland and China, also Latvia, Lithuania, Azerbaijan and Estonia.

In 2013, Georgia was number 21 among wine exporting countries. In 20 place was Moldova, which had USD 22 million more growth from wine export than Georgia.