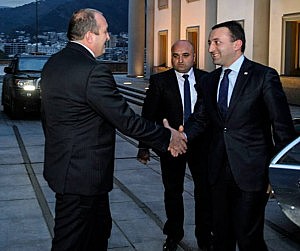 Giorgi Margvelashvili (left) and Irakli Garibashvili shake hands during a meeting of the National Security Council in October, 2014. (Interpressnews.)

TBILISI, DFWatch–The Republic of Georgia is faced with a dilemma: which of the country’s two top people shall attend the United Nations General Assembly in New York in six weeks?

Both the president and prime minister are invited and want to attend. Last year, a similar situation led to weeks of uncertainty when the two were both trying to represent Georgia at the UN climate conference.

That time, the president backed down, but this year Georgia might send two delegations. The government’s press office confirmed that PM Irakli Garibashvili will deliver a speech at the 70th session of the UN General Assembly in New York and will hold bilateral meetings during his visit.

A few weeks ago, president Giorgi Margvelashvili’s administration also confirmed that he is attending the General Assembly session after invitation by his Lithuanian colleague. Margvelashvili will take part in a discussion about the future of Eastern Europe: strengthening role of women.

Foreign policy adviser to the president Tengiz Pkhaladze said on Sunday that what happened last year ahead of the UN climate summit was a shame and shouldn’t be repeated, but refrained from divulging the president’s plans, only saying that they are working on them and the public will soon learn about them.

Foreign Ministry Spokesperson Davit Kereselidze confirmed to Moambe on Sunday that the prime minister will participate in the assembly debate, while the president is invited by the Lithuanian president, and this double attendance situation is an issue that the government is working on right now.

The 70th UN General Assembly session will take place from September 28 to October 3 in New York.