Georgia’s Russia-envoy does not plan to cancel Prague meeting

Georgia’s Russia-envoy does not plan to cancel Prague meeting 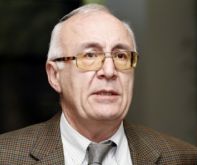 TBILISI, DFWatch–Georgia’s envoy for talks with Russia says he will meet his Russian counterpart in Prague on Thursday, despite criticism from his coalition fellow party members.

But Zurab Abashidze says he will inevitably touch a very contentious issue during the meeting with Grigory Karasin, Russia’s Deputy Minister of Foreign Affairs, of a proposed new treaty and that will tie the breakaway region Abkhazia into a close association with Russia and make it harder for Georgia to get back its territory.

“Of course, tomorrow I can’t avoid that document, the new treaty,” Abashidze told Imedi TV on Wednesday. “If signed, this agreement would further aggravate the situation in the region.”

He added that the bilateral meeting would be cancelled only if it is decided by the prime minister.

A day earlier, Abashidze caused controversy by saying that his fellow colleague from the Georgian Dream coalition, Tedo Japaridze, appears to have failing self-control, adding that it might be caused by his old age.

This was a response to what Japaridze, a career diplomat and now the chair of the parliament’s foreign relations committee, said a day earlier, that it was not wise by the Georgian side to participate in the bilateral meeting.

On Wednesday, Irina Imerlishvili, Secretary of the National Security Council, said that she shared Japaridze’s concern over Georgia’s participation in bilateral talks with Russia.

Also, President Giorgi Margvelashvili commented on the proposed treaty, asking parliament to discuss the issue and work out its position, and later the Security Council will meet to plan further steps to stabilize the situation, she said.

Foreign Minister Maia Panjikidze said that if signed, the treaty will be viewed by Georgia as an annexation of its legitimate territory.