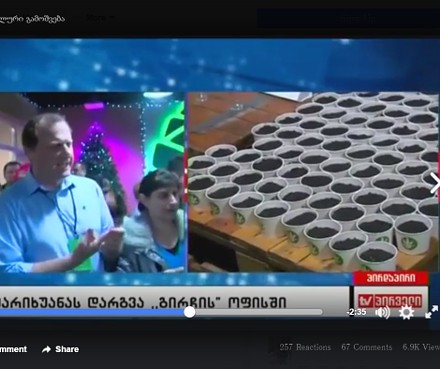 One of the plaintiffs, Zurab Japaridze, at the marijuana planting event on New Year’s Eve 2017. (Pirveli TV.)

TBILISI, DFWatch–The ruling GD party in Georgia rejects a decision by the Constitutional Court to abolish punishment for marijuana use, arguing that the ruling creates a ‘legal vacuum’ that the government pledges to fill.

The Constitutional Court on Monday announced a ruling which abolishes administrative fines for the use of cannabis. The ruling came eight months after the same court struck down a law requiring a doctor’s prescription to use marijuana that meant its effective decriminalization.

“Very strict regulation will be required to introduce in order to replace the norms that have been canceled by the Constitutional Court today,” Akaki Zoidze, the head of parliament’s health committee told journalists on Monday.

“We should not accept that marijuana is a safe product. Any drugs that are illegal are harmful to human health. This message should especially be conveyed to the younger generation. They should clearly know the risks associated with any drug use,” he said, adding that the ruling makes marijuana more permitted in the country than tobacco.

“The decision of the Constitutional Court on marijuana is dangerous and poses high risk. The number of [marijuana] users will increase very rapidly in the country,” Georgian Dream MP Dimitri Khundadze said.

Eka Beselia, an influential MP and the head of parliament’s legal committee, said that the parliament would discuss the new drug legislation during fall session. No consensus exists even among members of the Georgian Dream faction about how radical the new legislation would be in terms of drugs decriminalization or even legalization, she said.

In Monday’s decision, the Constitutional Court ruled in favor of two plaintiffs, Zurab Japaridze and Vakhtang Megrelishvili, against the parliament of Georgia. The two represent the libertarian Girchi political party and their lawsuit sought to declare unconstitutional the section of the law that sets administrative punishment for marijuana usage, which in most cases means fines.

“The placement of blanket responsibility for the use of marijuana is a disproportionate [measure] and contradicts the requirements of Article 16 of the Constitution of Georgia,” the ruling says.

However, this doesn’t apply to instances when marijuana use poses a concrete threat to the health of a third person, the ruling says.

“The Court considers the establishment of responsibility for marijuana use justified when the activity is conducted in educational institutions, in specific public places, for example in public transport, in the presence of juveniles, etc.” the court states.

The draconian drug policies of Georgia have long been criticized by political opposition and activist groups.

Girchi leader Japaridze gained notoriety with a media stunt on New Year’s Eve in 2017 when he planted cannabis at the party’s office in protest of the government’s harsh drug policies.